The Lasvit showroom, between tradition and modernity

By installing its showroom in the region of North Bohemia, Lasvit has chosen to build a strong architectural complex, in line with its values, not hesitating to play on the monolithic contrast of the buildings.

The young crystal company Lasvit is recognized for its exceptional glassware and its masterful lighting installations all over the world. Closer to its traditional know-how, it settled in the town of Nový Bor (northern Bohemia, historic cradle of Czech crystal-making). This project carried out by architects Štěpán Valouch and Jiří Opočenský, from studio ov-a, received the Czech Republic Architecture Prize in 2020. By installing its showroom in the region of North Bohemia, Lasvit chose to build a strong architectural complex, in line with its values, not hesitating to play on the monolithic contrast of the buildings. 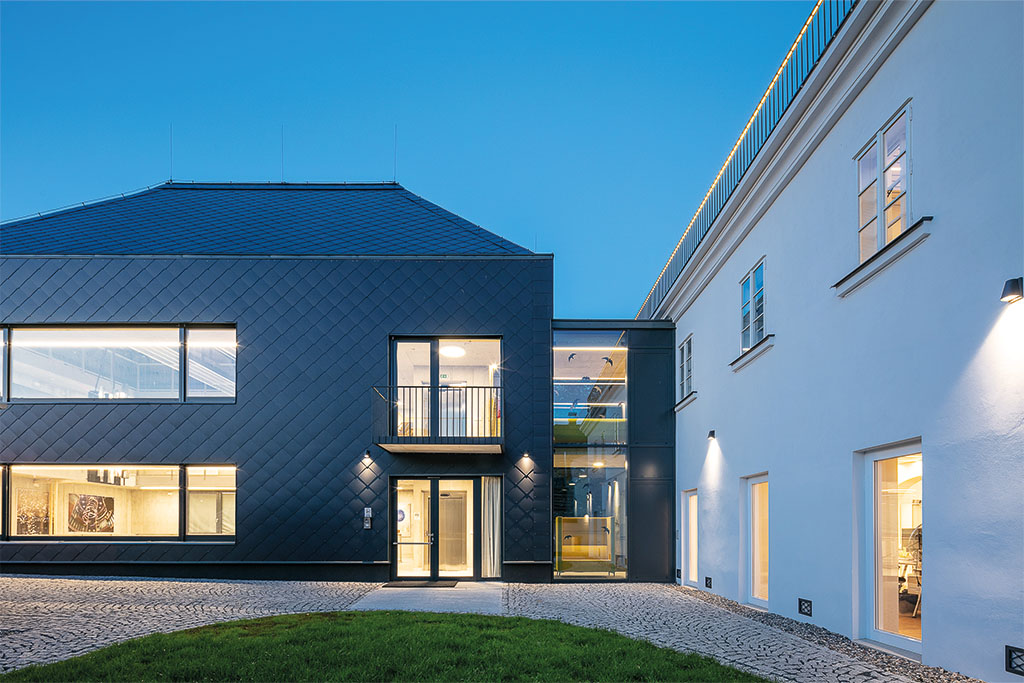 Glass, known as Bohemian crystal, recognized for its beauty throughout the world, is no longer limited to cut glass objects with opulent decoration and flamboyant colors, visible in the historic center of Prague… It is viscerally attached to the region of North Bohemia in the Czech Republic, the cradle for several centuries of an essentially utilitarian production. In the heart of these green hills with generous natural resources (wood, silica, water), abused by the chaos of the course of history, the precious Czech glass know-how has nevertheless persisted. In 1994, the architect and designer Bořek Šípek, creator of neo-baroque sculpted objects, and the glassblower Petr Novotný founded the artisanal crystal factory Ajeto, located in Lindava, which in the same year produced the first objects for the International Symposium glass intended to promote this ancestral art. Since 2017, Ajeto, led by David Ševčík, is part of the Lasvit group and pursues excellence in its production. The old wooden factory, whose volumes are reminiscent of the compact architecture of an Elizabethan theater with its passageway, has remained in its original condition, open to visitors. The furnaces (powered by gas today), the unchanged tools and the techniques of the glass craftsmen, are transmitted from generation to generation, magnifying the prowess of blowing, the precision of the cutting, or the molding, of a glass paste worked constantly hot… Each one, in turn (because of the arduousness due to the omnipresent heat of the ovens), is at his workstation in order to produce the most perfect works of art. 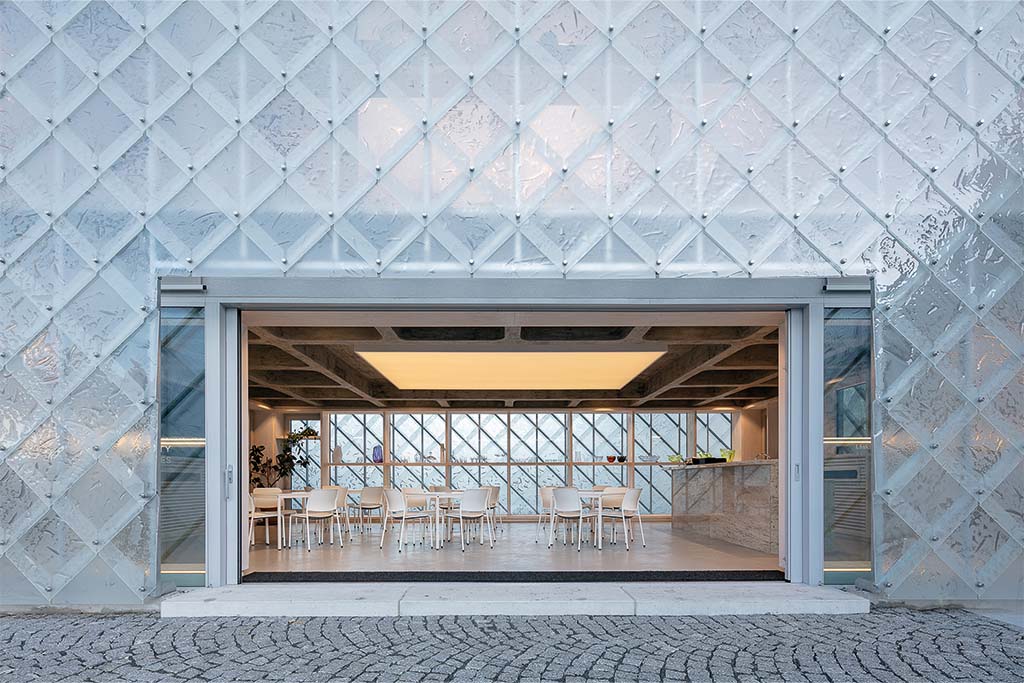 The new headquarters of the crystal and lighting brand Lasvit has opened in the historic town of Nový Bor which continues the tradition of craftsmanship, and combines glass and light in a contemporary language. The project is based on the integration of the historical existing and recent constructions. The old buildings, now classified as cultural monuments, were glass workshops and have undergone many alterations over two hundred years. At the end of the second half of the 20th century, a school of glassmaking took place there.

The design of project is based first on the conservation of the existing and to carry out a strict restoration of the building in the rules of the art. The two historic buildings were “cleaned” of the inappropriate interventions of the 80s and adapted to the furnishing of the company’s offices. Then the architects imagined two contrasting abstract volumes, one white, the other black. The archetypal first house is made of white glass, encloses the company’s internal café on the ground floor, the meeting room and the showroom, all covered by a concrete dome. The transparency of the facade plays like a backlit lantern, at nightfall… The entire building is covered with translucent glass tiles, developed in collaboration with Lasvit. 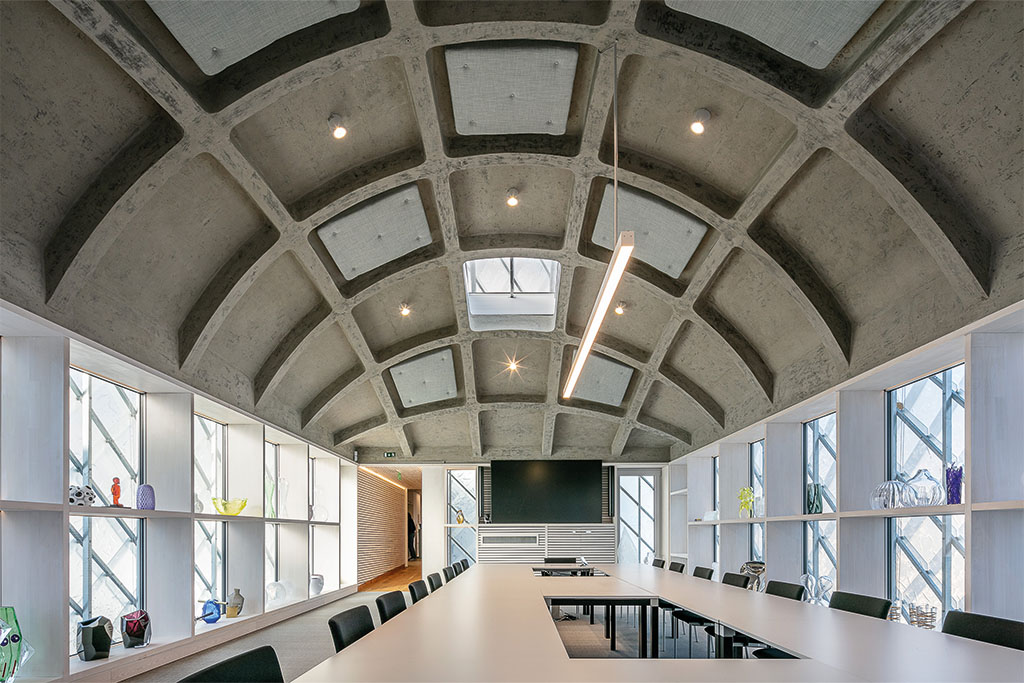 The second house is covered on the outside with slates, offering an exceptional space for the presentation of objects, the shots or the pre-assembly on a scale of 1, of parts that can weigh up to 5 tons… The coating of the facades is based on the proportion and laying of the slate used on the gables and roofs of the area, such as glass tiles. The four finalized houses are connected by the central courtyard, planted with trees. A fifth facing the square is under construction for public reception and offices. A sixth will see the light of day to close off the urban block surrounding the interior garden. 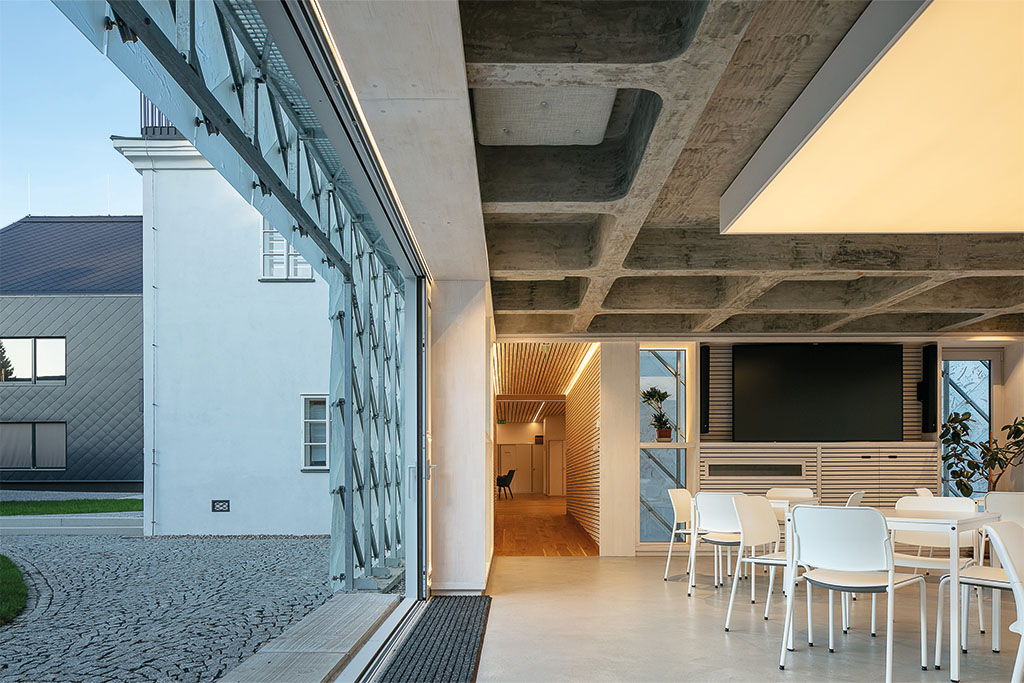