The Kamellschmelz, the candy steel factory

Transposing the main production principles of a steelworks to design a miniature candy factory: this is a very original way for the Luxembourg artist Trixi Weis to give more flavor to the industrial heritage design of her region!

For its nomination as 2022 European Capital of Culture, the Luxembourg city of Esch sur Alzette has chosen to revisit the history and heritage of its mining area, through a general program called Remix and which has in particular invested the heart center of the Esch Belval site and its blast furnace with a series of massive rooms and installations. However, on the sidelines of the central site, other local artists and designers have taken up the theme to explore this track of local color remixing in a more intimate and singular way. On the side of the FerroForum third place (iron know-how center housed in the original central workshop of the former Arcelor Mittal foundry in Esch-Schifflange), the visual artist Trixi Weis, guest artist for the European cultural year, thus imagined a curious project between machining and prototyping. A rather tasty project, since it turns out to be a real miniature iron and steel factory, which produces not steel but candies!

It is by inviting oneself into his long workshop, a former office at the end of the chain of the various laborious spaces of FerroForum where metal is still worked in an artisanal (and steaming) way, that one discovers the prototype of the device Kamelleschmelz (Kamell meaning candy and schmelz meaning foundry) designed by Trixi Weis. Blast furnace, rolling mill and even rails or transport vehicles, all on a reduced scale, are found arranged on a long work plan of several tables which give both a playful air, but also a very serious capacity to this whole process. industrious spread out before our eyes. “The realization of this candy factory is a challenge, because at its core, the production of hard sugar candies is completely different from the production of steel, both in terms of scale, ingredients, temperatures, conditions hygiene and production steps,” explains Trixi Weis. “The only thing in common is the heat intended to melt and cook ingredients to produce a liquid mass which will then resolidify. » 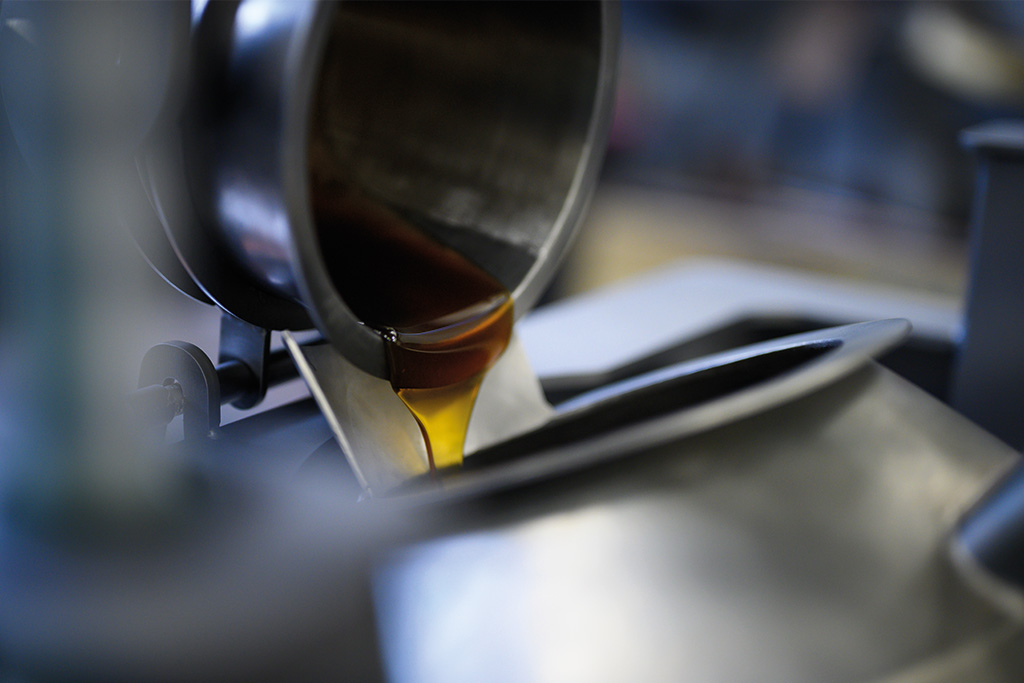 De facto, armed with her protective harness, Trixi Weis looks like a real steelworker in the photos taken from a first performance that she presents. “These same friends invited me to the cultural third place DKollektiv”, she says. “I made Kalugas there in a somewhat minimal DIY factory, during a culinary evening on the theme of the steel industry”. A first step in the process, it will be said, that the Kamelleschmelz prolongs and complicates. 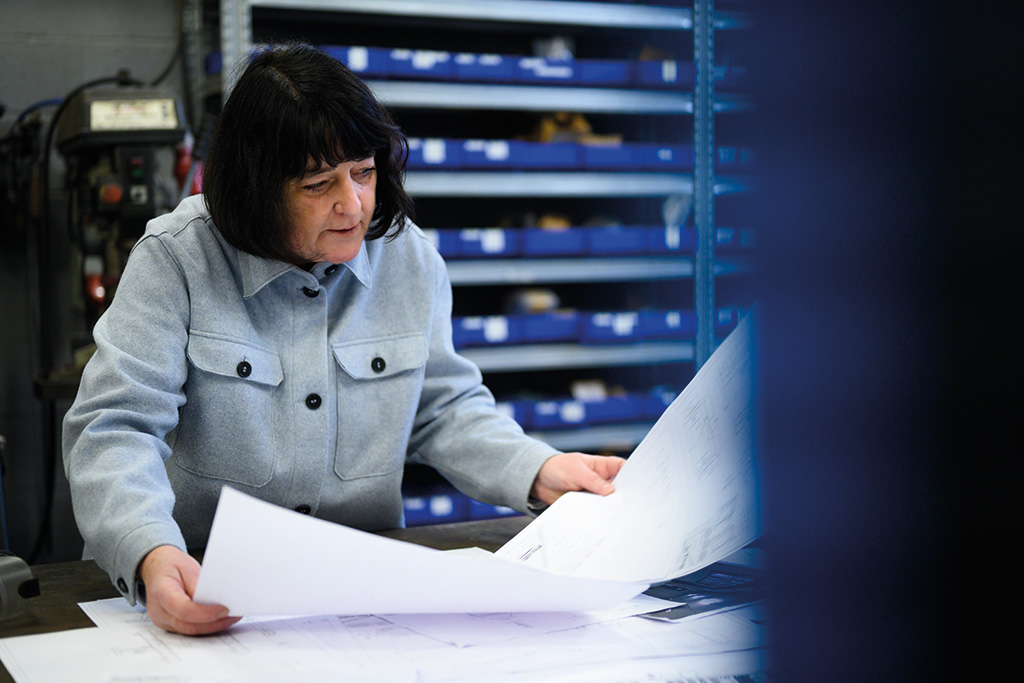 The plans were drawn up by the Luxembourg company Paul Wurh SA, which specializes in this field. And the production of the parts themselves was the responsibility of the educational and school teams of two technical high schools in Luxembourg: the Emile Metz private school and the Arts and crafts high school, as far as the blast furnace and the very beginning of the production line. “This beginning of the chain includes a freight elevator that takes the sugar to the blast furnace, and the blast furnace itself in which the sugar cooks,” explains Trixi Weis. “The students built the blast furnace, including the electronics. We did all the practical tests on site”. 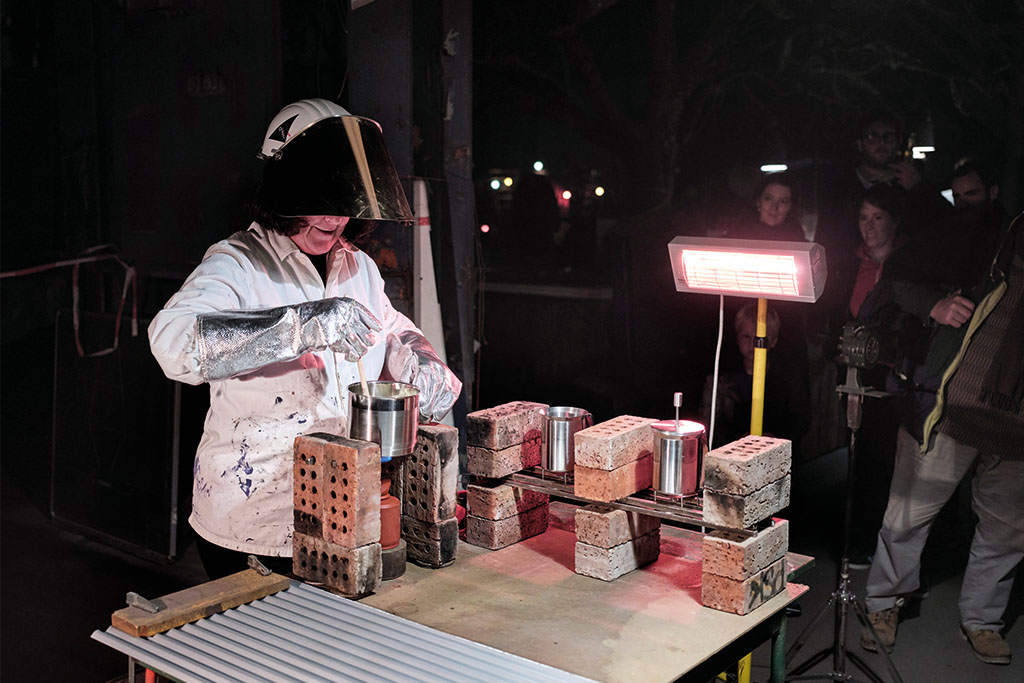 The central part of the device, in this case the bag transported by a train and intended to receive the mass of candy that comes out of the blast furnace, then, the crane transporting the bag to the converter and the converter itself, were made by another specialized company. It is in this converter that the taste of the candy (cola) and its coloring are added. The converter then pours the candy mass onto a stainless steel plate where it is mixed manually using a spatula in order to cool it before being passed through the rolling mill. It is this rolling machine that gives the candies their form of small pellets in strips. Candies then conveyed to the last stage: a kind of rotating sieve in which they are precipitated for deburring and sugaring preventing them from sticking before the fundamental stage of tasting.

For the curious, the FerroForum opens its doors on April 30. The Kamelleschmelz will first be visible as a non-functional construction. Then it will be presented to the public in activity from June 1 to 30 (by reservation at +352 621 254 466).