The Intelligence of the Hand Award: the 2022 winners

Each year, the announcement of the winners of the Intelligence of the Hand Award is a highlight of the fall. This Thursday, October 6, in a packed Wagram hall, during a ceremony celebrating above all the patience and passion of craftsmen and designers, and in the presence of Rima Abdul-Malak, Minister of Culture, the Bettencourt-Schueller Foundation unveiled the “class of 2022” of the Talents d’Exception, Dialogues and Parcours awards.
Since its launch in 1999 by the Bettencourt Schueller Foundation, the Liliane Bettencourt Prize for the intelligence of the hand has rewarded creators who develop know-how and innovate in the field of art crafts. Today, the prize has become both a reference and a label of excellence. It provides financial and strategic support to award-winning designers to further their projects.
For this edition 2022, were rewarded: Grégoire Scalabre, the duo Anaïs Jarnoux & Samuel Tomatis and the union of associations L’Outil en Main. The winners were honored by the President of the Foundation, Françoise Bettencourt Meyers, and by the jury, once again chaired by Jean de Loisy, exhibition curator and art critic. This evening was launched under good auspices, with a committed speech in favor of crafts and design Ms. Rima Abdul-Malak. The Minister of Culture recalled that her cabinet is the first to include an advisor specifically in charge of these sectors, and the importance of the role to be played by this economic, heritage and cultural breeding ground in the framework of France 2030. In addition, she took advantage of the evening to confirm live to artisans a new postponement this year of the tax credit.

The purpose of the Talents d’exception prize is to reward a craftsman for the realization of a work resulting from a perfect mastery of the techniques and know-how of an art craft. This year, it is the ceramist Grégoire Scalabre who is rewarded for his work “the Ultimate metamorphosis of Thetis”. Created as a tribute to the sea nymph of mythology, this piece celebrates the most humble and essential object of humanity. Indeed, the vase has accompanied man since the dawn of time, and Gregoire Scalabre sublimates it by multiplying it, by playing with scales and shapes. The work includes 70,000 miniature amphorae, made of translucent glazed porcelain. 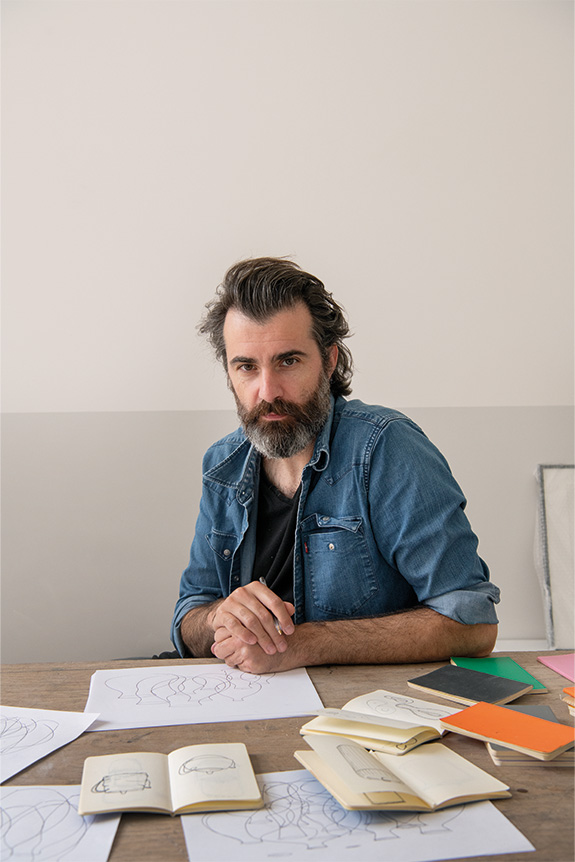 Grégoire Scalabre, ceramist, winner of the Liliane Bettencourt Prize for the Intelligence of the Hand 2022 © Ambroise Tézenas for the Bettencourt Schueller Foundation 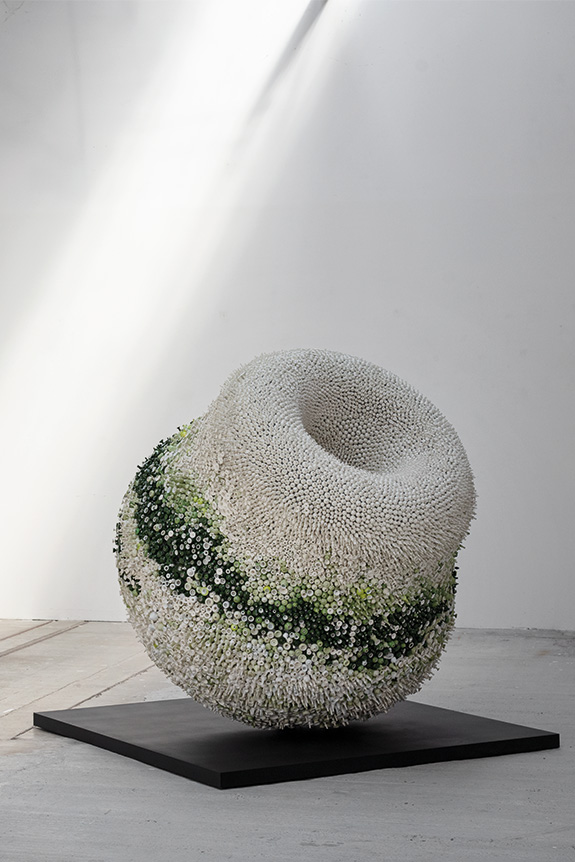 Work "The Ultimate Metamorphosis of Thetis" by the ceramist Grégoire Scalabre, winner of the Liliane Bettencourt Prize for the Intelligence of the Hand 2022, being assembled in his workshop © Anthony Girardi
Accompanied by the Bettencourt Schueller Foundation in this project, the ceramist will be able to create a new monumental sculpture and equip his workshop. Transmission being an essential value of his career – totally self-taught as he recalled on stage – he also plans to develop his current actions, in particular by creating a Master Class program allowing apprentices to meet art craftsmen with a singular approach to ceramics.
For this prize, Grégoire Scalabre is rewarded with an endowment of €50,000 and benefits from a support of up to €100,000 to realize a development project.

Since its creation in 2010, the Dialogues prize has been recognizing the collaboration between an artisan and a designer, through the presentation of a prototype or a creation that testifies to excellent craftsmanship, the artisan being challenged in his practice by the designer’s approach. The duo composed of the upholsterer Anaïs Jarnoux, and the designer Samuel Tomatis was rewarded for the prototype of the MS.86.Ulva bag, designed from a material composed of 100% algae, instead of traditional animal skins. A material that Samuel Tomatis has developed, tested and proven after six years of research in collaboration with craftsmen and scientists. It is totally biodegradable and can replace leather or plastic in both industrial and craft fields. This achievement is part of an ecological and virtuous approach. And on this project, the process of creating the bag has mobilized the expertise and know-how of leather goods and saddlery of Anaïs Jarnoux, met at Ateliers de Paris. With the support of the Foundation, the duo plans to create new pieces, perfect this biomaterial and develop its production process for a larger scale application. 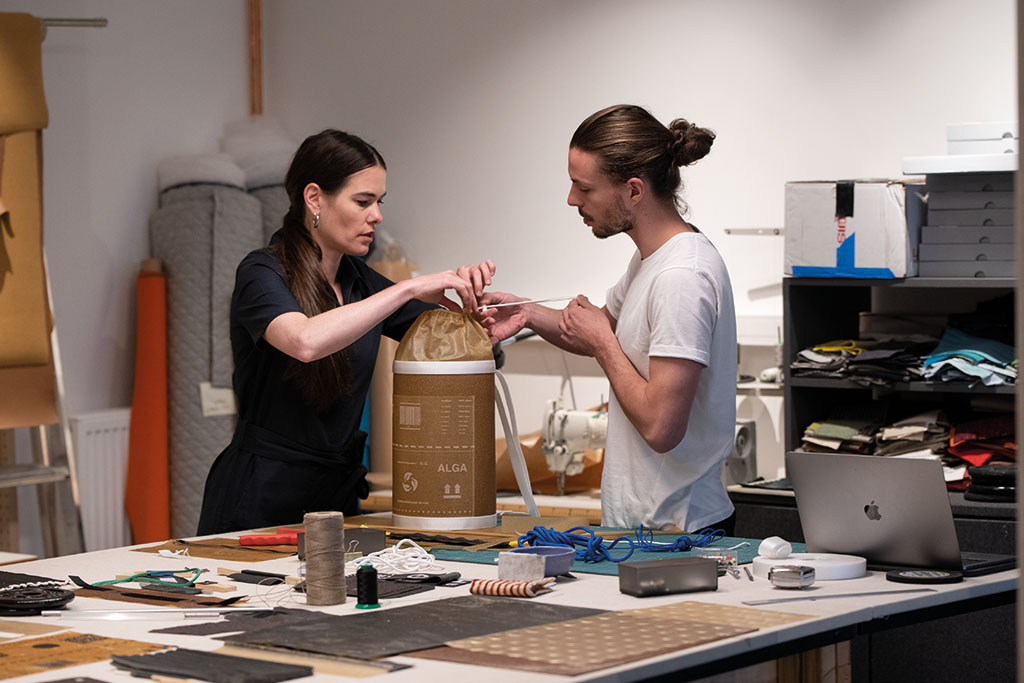 Anaïs Jarnoux and Samuel Tomatis, Dialogues laureates of the Liliane Bettencourt Prize for the Intelligence of the Hand 2022, working on the creation of their piece MS.86.Ulva (2021) in their studio © Ambroise Tézenas for the Bettencourt Schueller Foundation
For this prize, they get an endowment of €50,000 to share, in addition to support of up to €150,000 for the deployment of a prototype or object to further experimentation, research and innovation.

Launched in 2014, the Parcours award salutes a legal entity for its commitment and exemplary contribution to the French arts and crafts sector. This is the only award that does not require applications, the winners are detected by the experts surrounding the Foundation. This year, it is the union of associations L’Outil en Main ® which is rewarded. Created in 1994, its ambition is to call upon retired craftsmen and artisans to introduce young people to manual trades. Today, L’Outil en Main groups together 235 associations, spread over 68 departments, in metropolitan France, as well as in Guadeloupe and Guyana. Each week, 3,500 young people aged 9 and over are welcomed by the 5,500 volunteers. An opportunity to learn three or four different disciplines, to develop one’s dexterity by discovering gestures and tools and to create one’s “masterpiece”… An initiative that reveals talents, and the experience gives rise to multiple vocations. In fact, 40% of the young people who have passed through L’Outil en Main ® go on to choose a trade related to the craft. 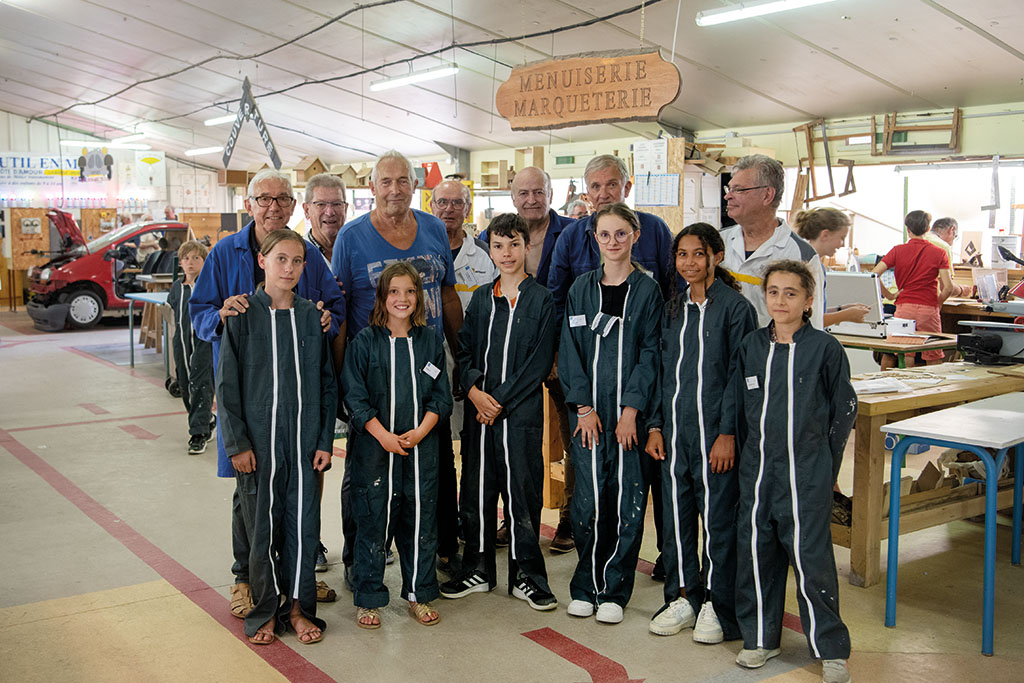 Group of trainers and young people introduced to manual trades in a workshop of the association L'Outil en Main, winner of the Liliane Bettencourt Prize for the Intelligence of the Hand 2022 © Ambroise Tézenas for the Bettencourt Schueller Foundation
With the support of the Foundation, L’Outil à la Main ® will be able to further develop its network of associations, support the recruitment of volunteers (particularly in the arts and crafts), and set up innovative workshop models designed, for example, for young people with disabilities. With this prize, l’Outil en main benefits from a donation of €50,000 as well as support up to €100,000 to carry out a project designed to promote the world of crafts.
And to go further, find :
– The Foundation’s action through the talk Jeunes créateurs at Paris Design Week 2021
– Samuel Tomatis’ approach explained during an Intramuros talk at Paris Design Week 2021
artistic careersLiliane Bettencourt PrizeArts and craftsBettencourt Schueller Foundation