Co-founder and scientific director of the Entrepreneurship, Territory, Innovation (ETI) chair and scientific advisor to the city of Paris, Carlos Moreno defends a concept of the quarter-hour city, a concept of complete neighborhoods taken up by the global network of large cities and megalopolises committed to the climate. A reflection that is part of the new forward-looking mission of FRENCH DESIGN 2059 (the FRENCH DESIGN by VIA), to be found in the new issue of Intramuros.

“The shape of a city / Change faster, alas! than the heart of a mortal, quotes Carlos Moreno, taking up Baudelaire. But me, I remove the “alas!”. The city can transform quickly to become more livable and less polluting. » The poet complained about the upheavals then carried out by Haussmann in the capital. The co-founder and scientific director of the Entrepreneurship, Territory, Innovation (ETI) chair calls for a rapid metamorphosis, now helped by the chorus of all those who have realized that they are deadly with the Covid-19 pandemic. On July 15, 2020, her concept of a quarter-hour city was adopted by the C40 Cities Climate Leadership Group – the global network of major cities and megalopolises committed to the climate that Anne Hidalgo chaired from 2016 to 2019 – as ” key to vault for postpandemic recovery », Explains the researcher in video behind his screen. On the program, chrono-urbanism, chronotopy and topophilia … for a polycentric city less governed by the car.

In its white paper, the C40 defines its new agenda for “A green and fair recovery”: ” We are implementing urban planning policies aimed at promoting the “quarter-hour city” (or “complete neighborhoods”) as a framework for revival, in which all the inhabitants of the city are able to satisfy the need. most of their needs within walking or cycling distance of their homes. The presence of local facilities, such as health centers, schools, parks, catering outlets, essential shops and offices, as well as the digitization of certain services, will enable this transition. To achieve this in our cities, we need to create a regulatory environment that encourages inclusive zoning, mixed-use development, and flexible buildings and spaces. “. This profession of faith, the entry into the chapter “Health and well-being”, was unlikely not long ago. 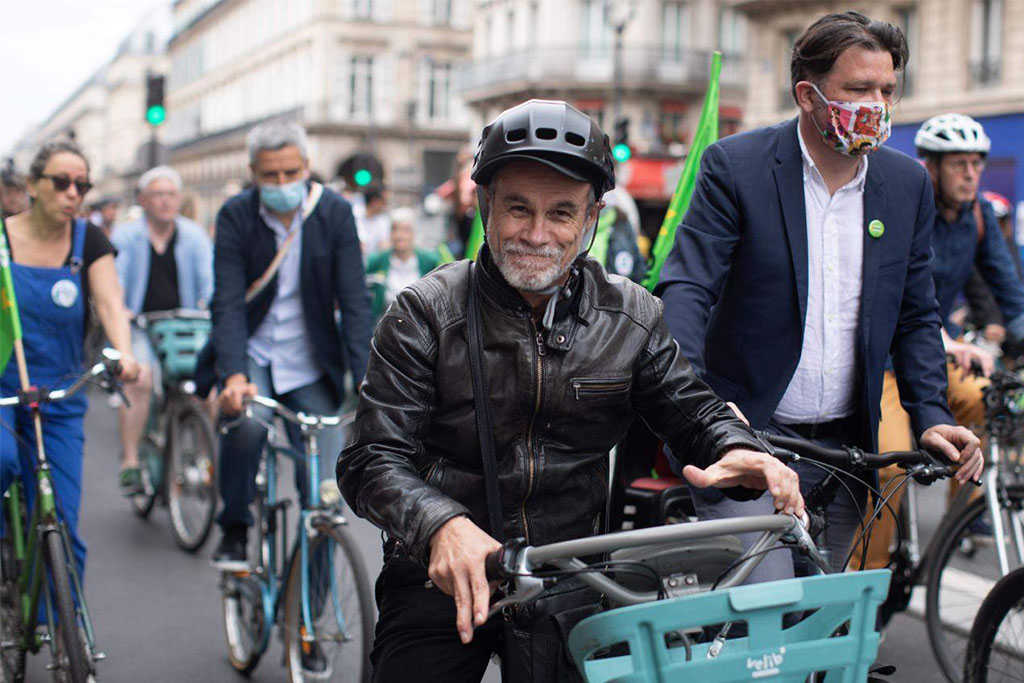 The health crisis, accelerator of change

When, in 2016, Carlos Moreno, specialist in sustainable digital cities and associate professor at the Institut d’Administration des Entreprises de Paris (Sorbonne business school) published an article in The gallery entitled “The city of the quarter of an hour: for a new chrono-urbanism”, few readers believe in its proposals, or worse. “ At that time, everyone stumbled upon me », Remembers the researcher. But the idea ends up being attractive, especially since the health crisis has given this concept of hyper-proximity an unexpected reality.

While with the health crisis most activities have refocused around housing, the organization of a quarter-hour city has become immediately noticeable. Telecommuting, which seemed like a utopia – for better or better – or a heresy has become a norm. In less than a year and all over the world, cycle paths have multiplied, numbers of parking spaces have been transformed into café and restaurant terraces. While these urban transformations are not yet sustainable, the voices calling for a return to the previous situation remain in the minority. The tensions caused by noise or visual nuisance due to the multiplication of terraces may, for example, require the establishment of new rules and the learning of another common use of the street.

They can also invite innovation on the part of manufacturers of street furniture: when will we see mobile acoustic awnings that muffle the noises of conversations while protecting against the rain and the sun? Questions always arise: how to limit transits without creating areas between oneself? How to welcome non-residents? All these Ile-de-France residents, concerning Paris, who come to work for the day? The multiplication of constraints will not be enough to produce changes accepted by all, it is also necessary to produce both political and ergonomic solutions to facilitate the acceptance of transformations.

Changing lifestyles rather than the city: chrono-urbanism

The fact remains that awareness of climate change and, above all, the need to change our lifestyles seems acquired. Specialist in the study of complex systems and in the development of innovation processes, Carlos Moreno began working on the sustainable digital city (the beginnings of the smart-city), before abandoning experiments that were never deployed. on a scale to offer a framework that is both synthetic and open to city officials to lead a new urban policy. The main idea ? “ Not to change the city, but to change our way of life in the city », He explains. How? ‘Or’ What ?

By first asking yourself “ on what the city offers to inhabitants for the use of their time of life, by making its ontology “. To the question what is a city? The researcher responds with six essential urban social functions: being able to find housing, produce, take care of oneself, obtain supplies, learn and flourish. And proposes, in order to bring them together, to stop fragmenting spaces by function in order to develop a polycentric, rhizomic city thanks to chrono-urbanism. Either promote a new urban temporality, set up according to the needs of the inhabitants. 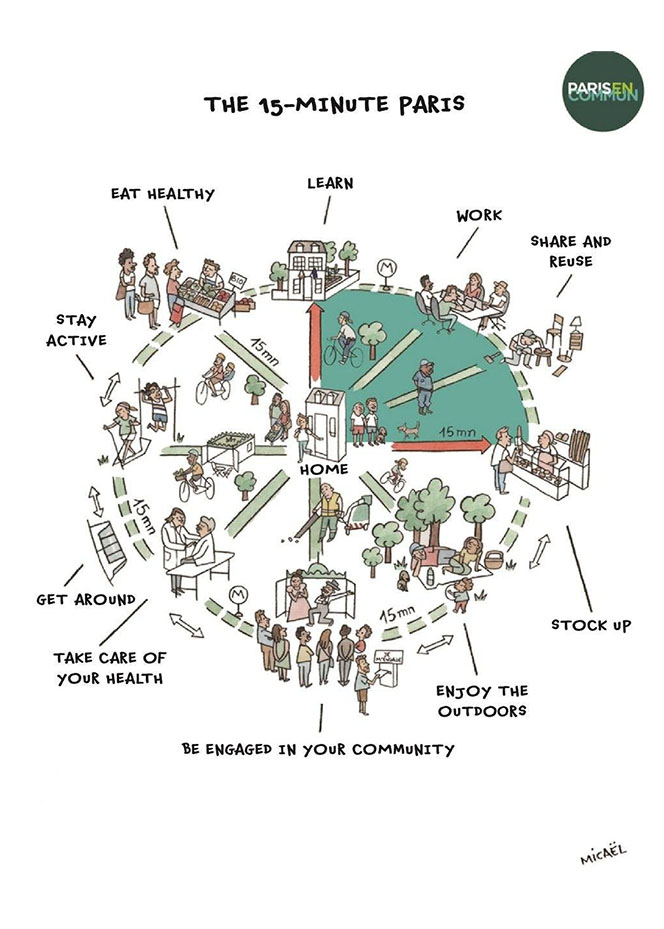 In contrast to Le Corbusier who wrote in 1924 in Urbanisme that “ the city that has speed has success Carlos Moreno is working to reduce both speed and distances. ” Before, the essential activities were far from the inhabitants because we had cars, transport. The formula at the heart of our lives was: go faster, go further, »Explains the researcher. The whole leading to an urban organization according to the precepts of the Charter of Athens, written a few years later in 1931, which divides the space into areas of work, administration, commerce, housing … since transport, always more efficient and rapid, should allow the whole to be linked together with fluidity and efficiency. A model that has had its day.

After the residential and tertiary sector (due to heating and now air conditioning and poor insulation), it is transport which is the main contributor to global warming. Limiting it seems obvious to Carlos Moreno during the COP21 and his participation on the sidelines of the Summit of States, in the meeting of 700 mayors of the world’s major cities on December 4, 2015. Their objective is indeed ambitious: to reduce carbon emissions by 80% by 2050. We must act quickly. For him, the reduction in traffic, already underway in many large cities despite resistance, must accelerate. But beyond the constraints, we must also propose an enviable objective. ” Many of these trips are not useful, most are forced. My initial idea was therefore that of a chosen mobility: demobility », Tells the researcher who then bet on proximity and the chosen time and deploys the idea of the city of the quarter of an hour and its hyper-proximity services.

Since 2020, in Milan, the city council has committed to guaranteeing proximity to all essential services, encouraging teleworking and opening 35 additional kilometers of cycle paths in Portland, which is continuing its 2012 plan to 2030 to guarantee 90% of its population access to all its needs – excluding work -, has already transformed 150 kilometers of its streets into “green streets” with new housing welcoming shops and services on the ground floor and bringing calm and shade to citizens .

In Paris, the town hall wants ” add offices and coworking centers and encourage remote working, so people can work safely closer to home or at home. It is also essential to expand the use of existing facilities: use libraries and stadiums outside normal hours, use nightclubs as gyms during the day, or make schools parks and play spaces during the day. the weekend. Greening is part of the initiative: adding green spaces to existing public spaces, creating new urban parks and forests, and establishing new gardens for urban agriculture. Limiting cars, for example, near schools when they open and close, will make walking and cycling safer. The city will also encourage local businesses, spaces and places of sharing and exchange in order to promote the development of existing local businesses. “ 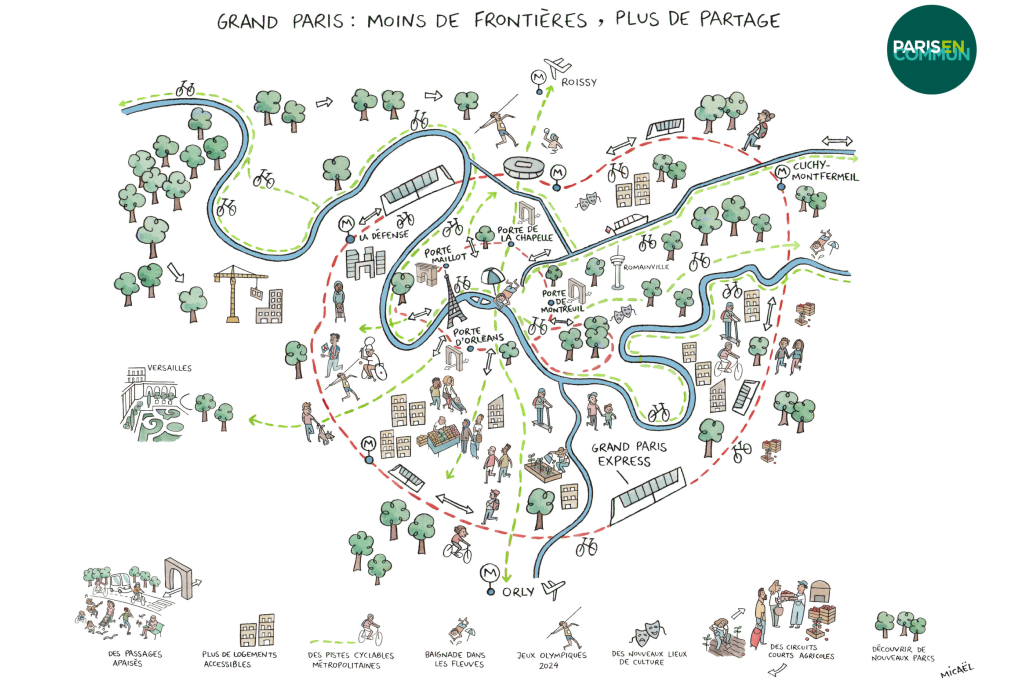 In the French capital, the opening on weekends of a dozen school and college courses to the local population, set up in January 2021, has already been extended to 36 additional establishments in May. An illustration of the concept of chronotopy which must henceforth link each public place (topos) to a time (chronos) of use and no longer to a single function. Depending on the days and hours, or even the seasons, its destination changes: from an educational establishment during the day and the week, it becomes a common space on weekends and during the holidays, to accommodate various activities. In an increasingly dense city, “ you have to concentrate your activities. By using what already exists, by mobilizing it over time “, Repeats Carlos Moreno who explains having abandoned” the implementation of small tests with demonstrators for the smart-city which never went to scale for a paradigmatic approach which requires understanding the reasons for the changes essential to be implemented. As such, the territorial reform which grants more power to the mayors of the districts makes it possible to better meet the needs of the citizens and to initiate consultation. The professor advocates a revision of the local town planning plan (PLU) of the city, according to this theme, and greater flexibility for the city to be considered as a living organism. Transitional town planning thus makes it possible to occupy a wasteland for the time to experiment or find a new destination for it.

“ We need peaceful cities, not whirlwinds, supports Carlos Moreno. Cities are at the forefront of whether or not we increase our capacity to survive global warming. For this, increasing the use of buildings is not enough. It is also necessary that the inhabitants feel good in a more compact city, always denser. This is where topophilia, or attachment to place, comes into play. The exodus, during confinement, of the best-off populations to the countryside or medium-sized towns revealed – if it was necessary – the importance of access to green spaces and more comforting places. ” Studies show that a dense city that has been able to integrate plants into its development limits “escape routes”, emphasizes the scientist. Nature, water and biodiversity must be better taken into account. ”In addition, the appropriation of places, the involvement of users in the making and life of their environment allows greater sustainability of these. We pay more attention to what we like. The quarter-hour city is also a city that heals relationships.

Find other thoughts in the latest issue of Intramuros, as part of a special section “Rethinking spaces in the age of new nomadisms”. This file was conducted in partnership with the FRENCH DESIGN by VIA, as part of their new prospective mission The FRENCH DESIGN 2059 .