On October 21, 2021, Stefan Diez was in Barcelona with part of his team for the launch of his latest collection of lighting for the Spanish brand Vibia. Working with Pére Llonch, CEO of Vibia, he was in charge of the launch of Plusminus, “The New Era of Lighting”. The Vibia showroom built by Francesc Rifé Studio and fitted out by Saus Riba Llonch architects and Carlota Portavella, reflected this perfect revolution in the way of lighting, light and electricity. 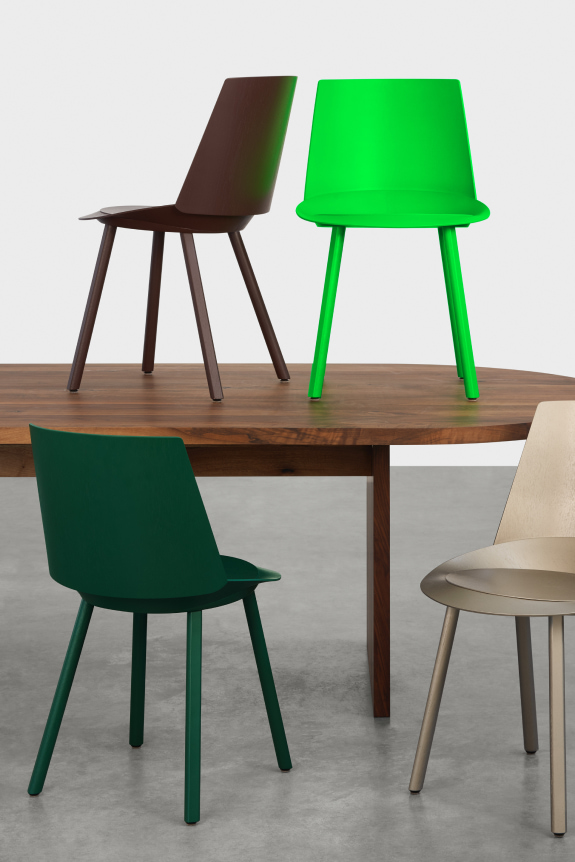 In 2017, at the MAKK in Cologne (Museum fur Angewandted Kunst Köln), Stefan Diez filled up the spaces of this gigantic museum, filling the “Full House” or Maison Pleine with his creations. This retrospective already covered the last 15 years of its production with products for e15, Thonet, Hay, Wilkhahn, emu, Flötotto, Rosenthal, Sammode… but also projects for Arita ceramics, and plastic cases for Authentics. A special section was reserved for “invisible” projects that never went into production. But at Vibia, we could finally see the result of a development process that spanned three and a half years.

Three and a half years is the time it took Vibia and Diez Office to develop the Plusminus program. With Plusminus, he explores the potential of electricity that can make amazing indoor illuminations. The great intelligence of Plusminus is to run electricity in a ribbon, a flat ribbon with a skilful weaving of copper threads and synthetic fibers, in which a low voltage of only 42 volts circulates without danger. 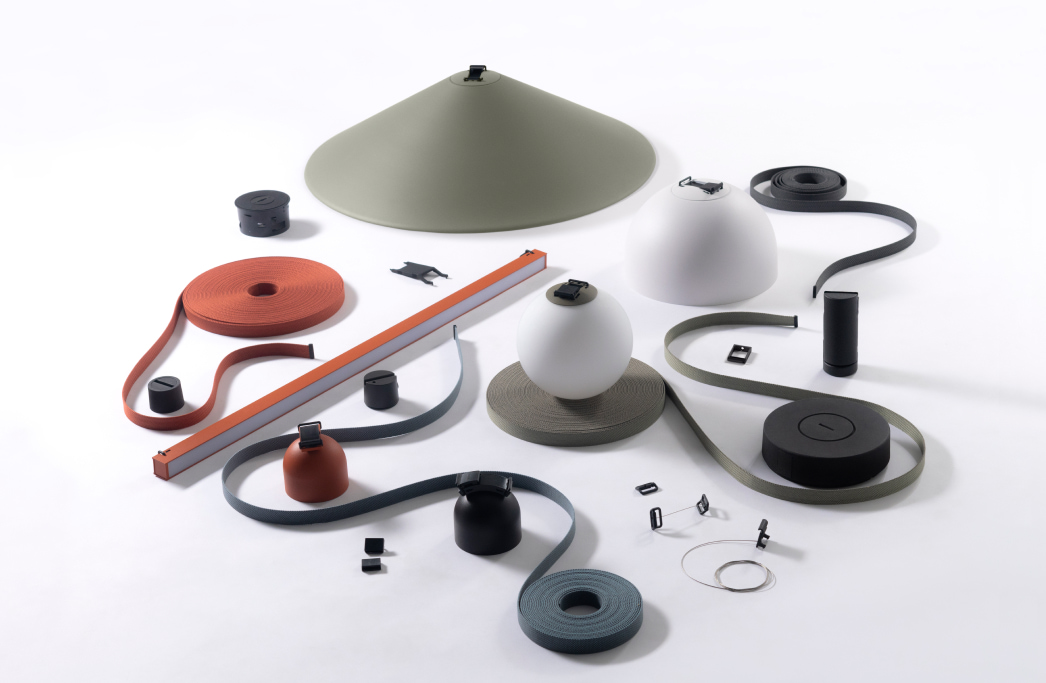 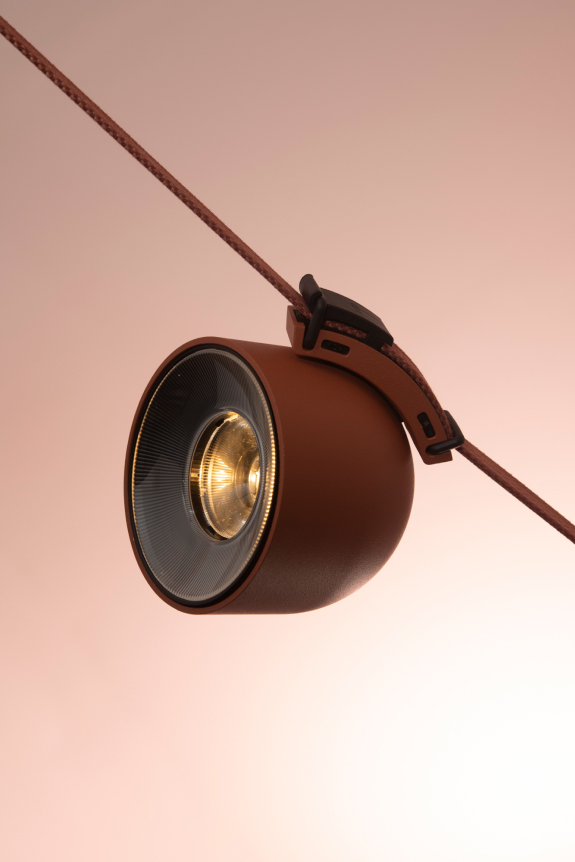 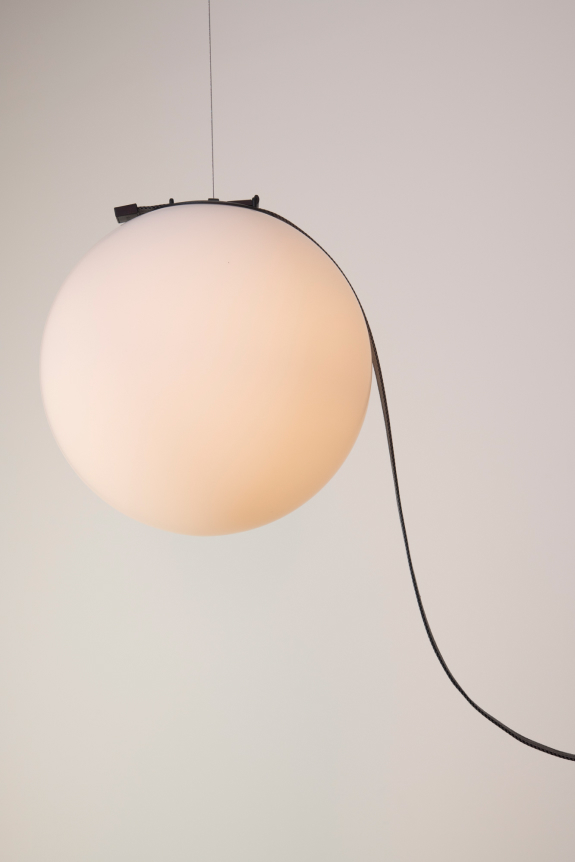 Emancipating the light from architecture, such has always been the wish of Pére Llonch, CEO of Vibia founded in 1987 and present in 103 countries (in six languages). At the Lighting fairs, Euroluce in Milan, Light + Building in Frankfurt, Vibia shines with its installations signed by the greatest designers. At the new headquarters, 15 minutes from the center of Barcelona and 10 minutes from the airport, a portrait gallery bears witness to this: Fernando Brizio, Lievore Altherr Molina, Sebastian Herkner, Arik Levy, Note Design Studio, Antoni Arola, Ramos and Bassols … are present as sponsors of the brand. The 2,050 m2 showroom is next to a 16,000 m2 factory in which the products are assembled and shipped. 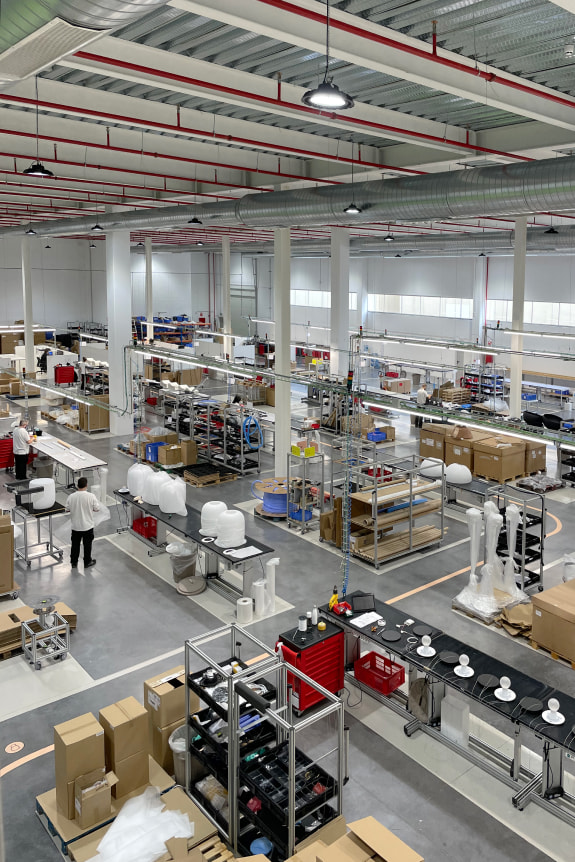 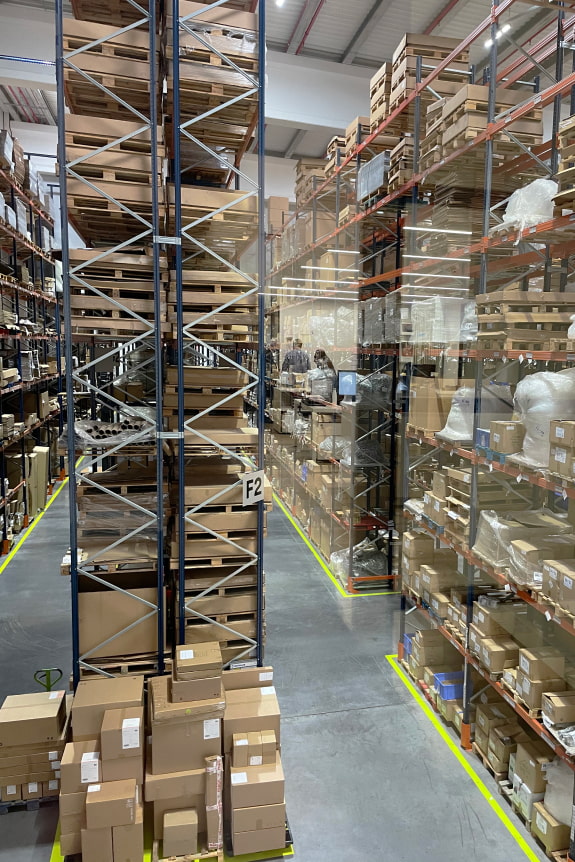 …And there was light

A “simple” loom, Sächsisches Textilforschunginstitut (STFI) that of Karina Wirth, textile designer at TPL, Textile Prototyping Lab, a consortium funded by the state and two research institutes, was enough to keep the thread running. in the strap. In 2019, during Euroluce, the product was shown in the development phase as a “work in progress”. Today, there are four straps and a tool box left, a tool box with all the imaginary accessories to make this revolution an innocent revolution, without danger even for children.

“You have to lead the light into space to help people like the space they are in,” explains Pére Llonch. They are not just products, but products for people. When we developed the product, we focused on the use of the product. Its use in its functional aspect to realize how important space is. We are not talking about light architecture but simply emotion, an invisible light. What design means today is Vibia. It is not the product alone but its entire installation and how it is delivered to the consumer that matters. “

Taken up by Hay, “Rope Trick” was already trying to create atmospheres. LED has today reached a level of flexibility and sophistication which makes it the Swiss army knife for the creation of lighting atmosphere. Plusminus offers the possibility of placing light sources at any point in the space. And lighting has taken on new forms. He creates atmospheres and it’s up to the designers to sign the shapes. It is a flexible product that only requires an online configurator to do the most aerial installations. 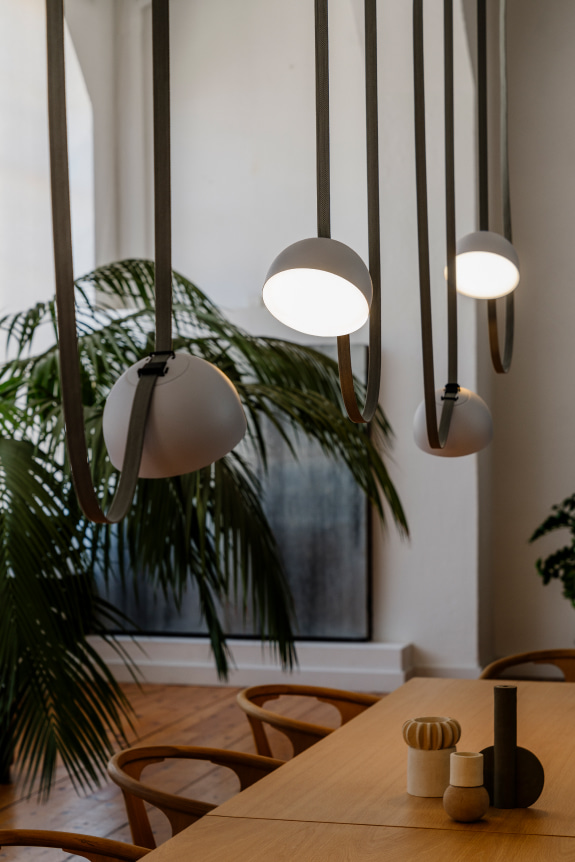 With the Covid crisis, working and operating methods have been radically disrupted or improved. No need to go there to monitor the making of an object. The automatic configurators are responsible for calculating the number of parts necessary for the installation of such equipment. Plusminus is entering the era of the digital product, the physical aspect of which involves the intervention of designers and the connections the presence of programmers for an infinite offer.

In recent years, the Diez office has devoted itself to developing guidelines for a circular economy, believing that designers can make a significant contribution to the transformation of the global economic system. His sofa “Costume” for Magis is the proof of this. It must adapt to changing conditions of use but also testifies to a guarantee of useful life throughout its life. “Product design must accept this reality by prioritizing flexibility and modularity as much as possible. Products are made from different parts and materials that wear out at different speeds. It is important to understand this variability and design around it, so that all components can be repaired or replaced by the user or local repair shops. (…) A circular product can be updated. Design must accept to work with this imperfection by creating products in which individual elements can be enhanced and reincorporated extending their lifespan in the market. “ Energy consumption should be limited and applied over the life of the product, from manufacturing to recycling. Finally, transport must not increase its environmental impact. And, paradoxically, a circular product must be produced as little as necessary, almost to order.

With a cabinetmaker training, a diploma in industrial design obtained in 2002 at the Academy of Stuttgart under the positive influence of Richard Sapper for whom he will carry for two years the micro-computing project “wearable computers” for IBM then a Assistant position at Konstantin Grcic in Munich, Stefan Diez masters everything. Meticulousness, intuition, technical experience, productivity and originality. His time with all the manufacturers has served him to complete and confirm his intuition again and again. He’s got the feeling as we would say.
From the 11th of November, 2021, the general public will be able to see in the vacant spaces of the Preysing Palace, behind the Feldherrenhalle on the Odeonsplatz, between the Opera and 5-Höfe, one of Munich’s busiest squares, Diez Office projects in the “4th wall” experiment. Artist-friends, designers, photographers are encouraged by the Munich real estate company Cocon GmbH to express themselves behind this imaginary wall as if they were not seen. At the end of November Plusminus will be put on the market at the same time as the configurator, flexible, fluid, intuitive to use, will be launched. An experience to see and a good reason to see Munich again. 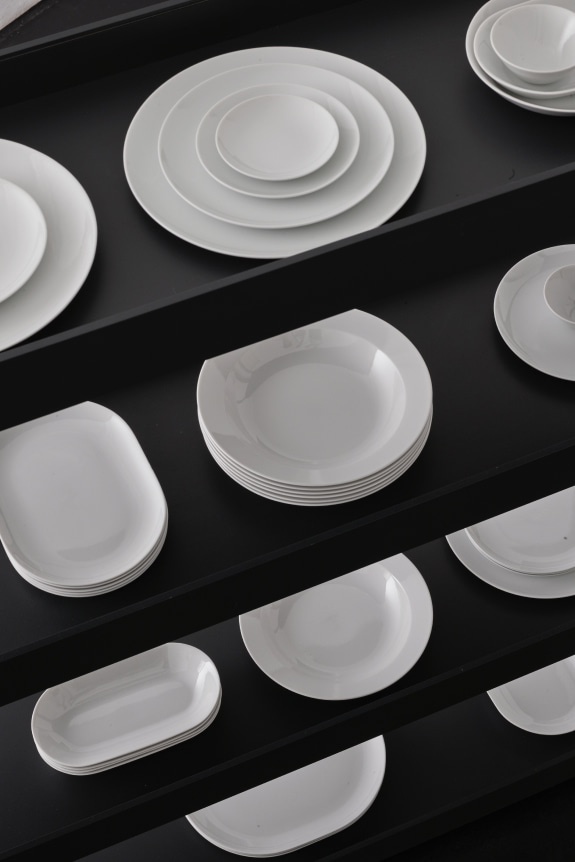 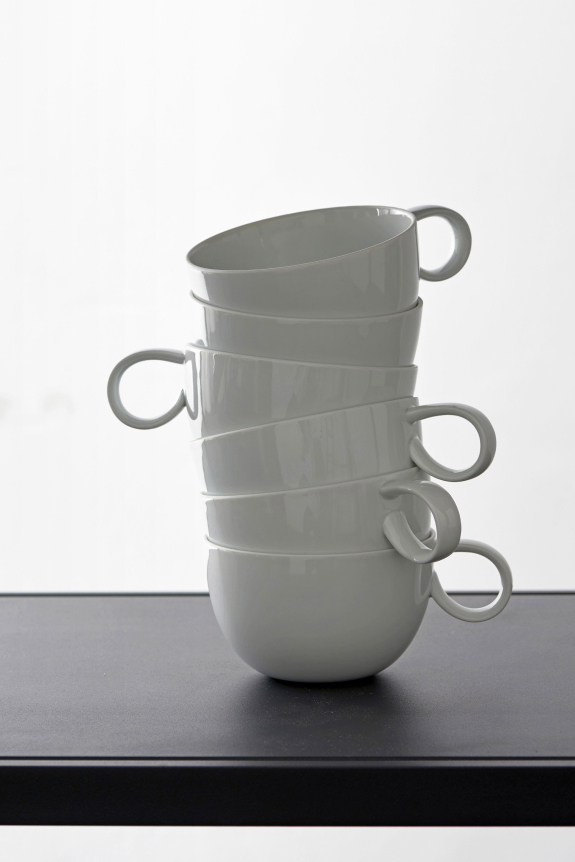