Reopening of the Samaritaine: an architectural intention between Art Nouveau and minimalism (1/3)

La Samaritaine in three acts . This endearing Parisian department store that concentrates 150 years of history has reopened its doors to general public on June 23, 2021. An entry into the scene of the “Samar” eagerly awaited! First section devoted to architectural intention. (1/3)

After 16 years of work and multiple challenges, the Samaritaine project has finally come to fruition, or almost. A hotel, included in the plan, will be unveiled in September. (Rediscovery of the department store, jewel of Art Nouveau and Art Deco, founded in 1870 by Ernest Cognacq and Marie-Louise Jaÿ and transformed the Sanaa architecture agency.

La Samaritaine was closed in 2005 for safety reasons of dilapidated structural elements (glass pavers). The 750 million euros project, financed by the owner of the LVMH premises, raised a lot of constraints and controversy. On the one hand, the gigantic restoration of the four buildings classified as Historic Monuments and the integration into the social housing program imposed by the PLU, have brought the emblematic department store into a new era focused on the international scene. From Art Nouveau to today, the “Samar” dear to Parisians and tourists from all over the world has evolved with the times.

However, La Samaritaine reduced its initial retail space by more than half, i.e. 20,000 m2, to include 600 brands chosen by DFS (world leader in the sale of luxury products intended for travelers) 96 social housing, a nursery, a luxury hotel, the Cheval Blanc, and offices. The colossal work of renovation, conservation of the original structures and decorative elements, was coupled with technical constraints, in particular for the alignment of the facades. The Saana agency’s project was not unanimous, far from it, since many opposed it (residents, associations, etc.). After several appeals, the Council of State gave the green light. The undulating transparent glass double skin reflects the Haussmannian building, infusing a modern breakthrough in the rue de Rivoli. But also, an underground corridor, a new passageway, connects the whole. We rediscover with happiness the successive constructions, carried out between 1905 and 1928, in Art Nouveau and Art Deco style, intended to enlarge the stores, by architects Frantz Jourdain and Henri Sauvage.

The peacocks fresco, signed Francis Jourdain, painted canvas of 425 m2, deposited then restored in the workshop, is considered a masterpiece of Art Nouveau; it is finally revealed in its most dazzling colors, while on the ground the glass tiles, of astonishing modernity, manufactured identically thus make the space unreal.

The metal framework made it possible to increase the volumes and bring light inside the store. In addition, there are the enamelled Volvic lava decorations signed by the son of the architect Francis Jourdain and the poster designer Eugène Grasset, which soften the modern and industrial aspect. Inside, the rehabilitation of the Art Nouveau building, now called Pont Neuf, the creation of two skylights by Saana in addition to the glass roofs are a real success. We remember the decorative elements and the fluid space that have passed through the ages …

The remarkable ornaments of the Eiffel structure were painted in gray, the original color from 1910 concealed under several coats of paint. The mythical staircase in original oak, symbol of the department store, has always defined a fluid circulation; the railing with 16,000 gold leaves, the Art Nouveau ceramics are all decorative details that make it so great. Finally, the top floor is the highlight of the show which leaves the visitor speechless. Under the glass roofmonumental metal frame from 1907, natural light floods in; the original glass has been replaced by electrochromic, more technical, which is tinted according to the luminosity, and transports the spectator in an atmosphere, almost magical. 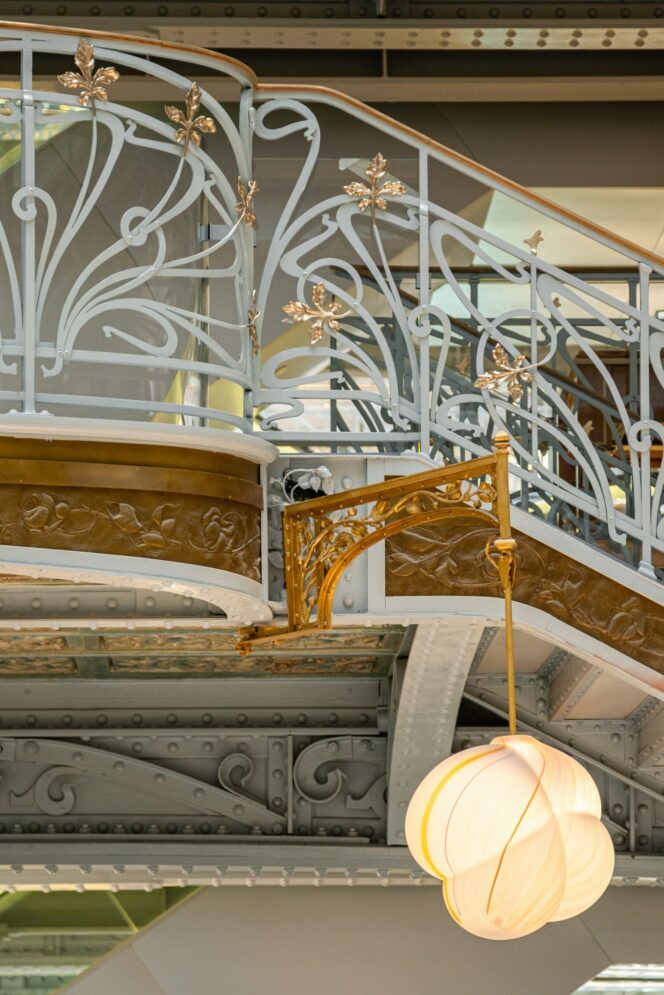 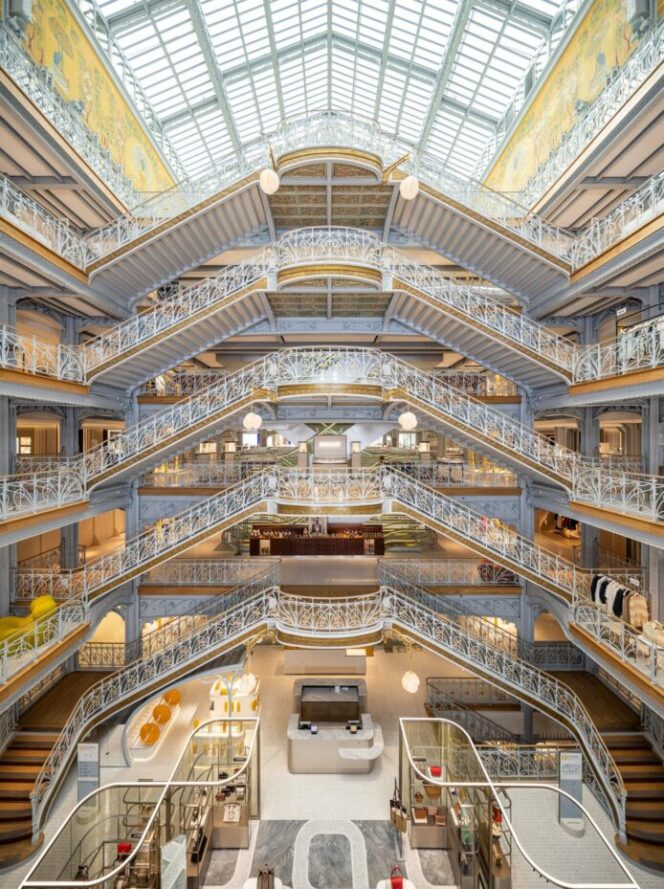 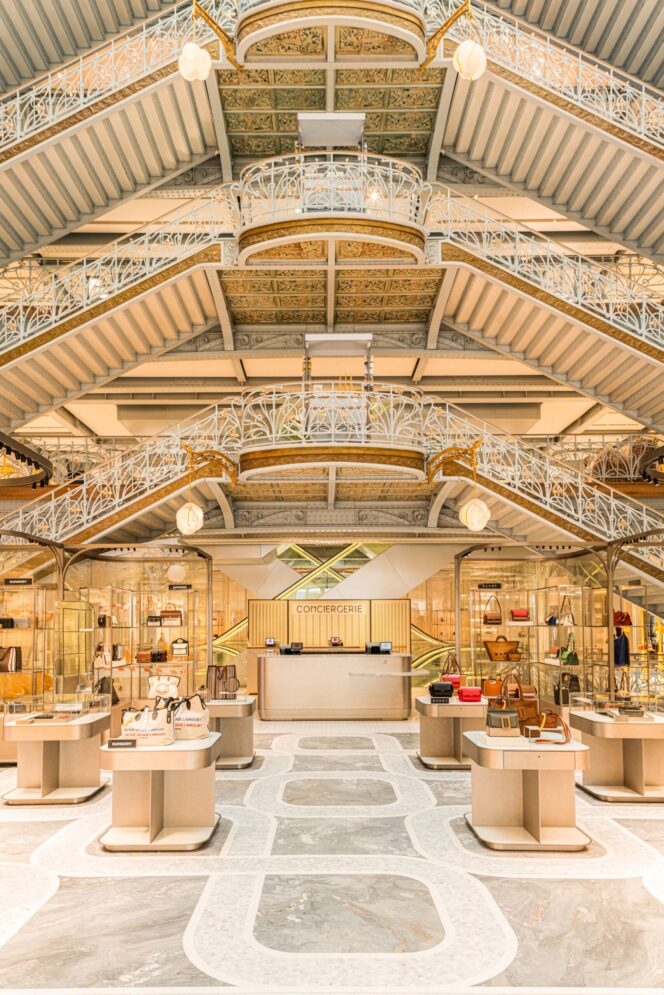 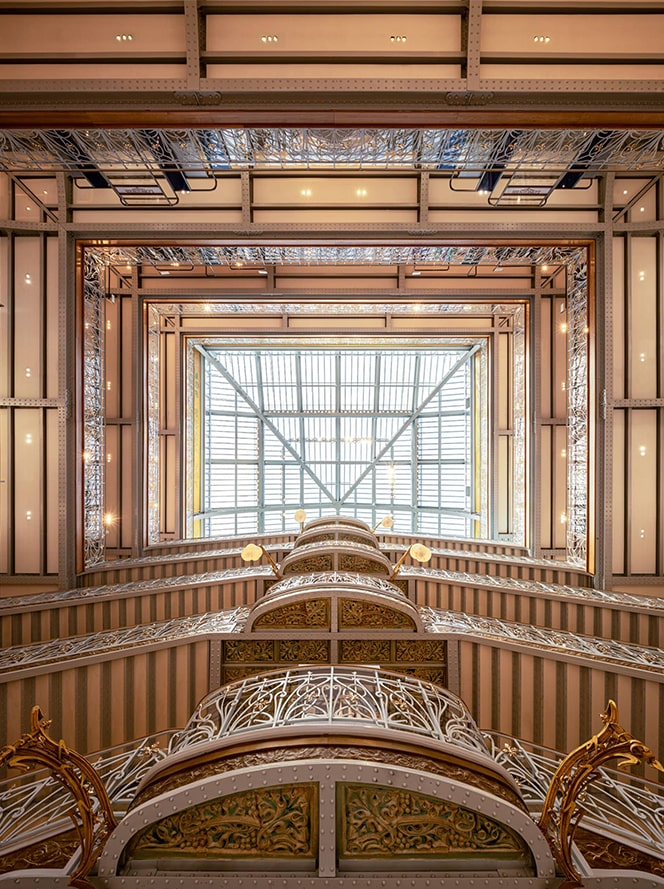 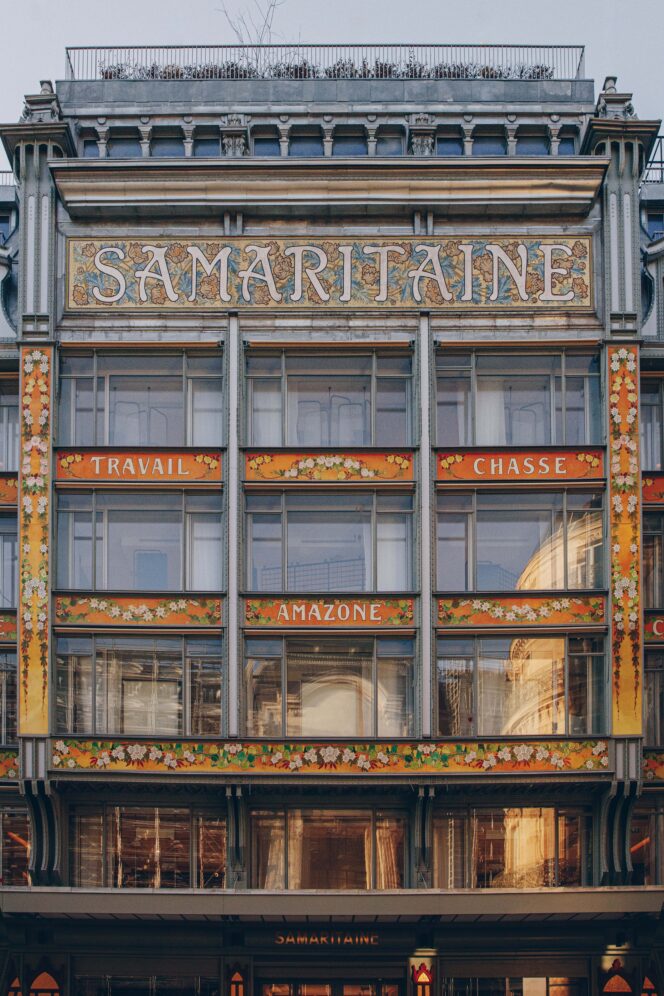 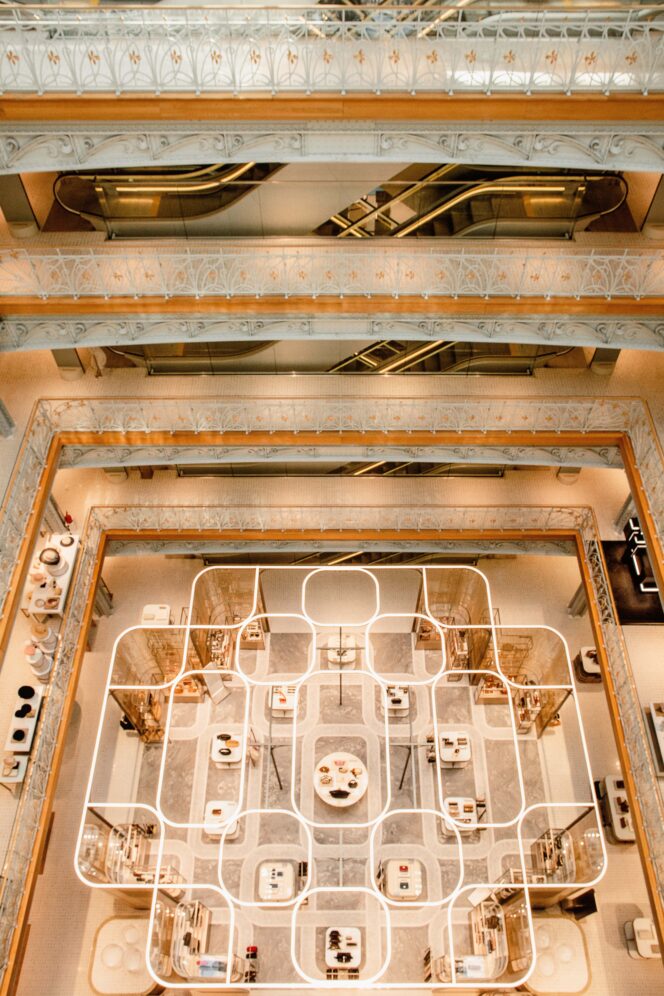 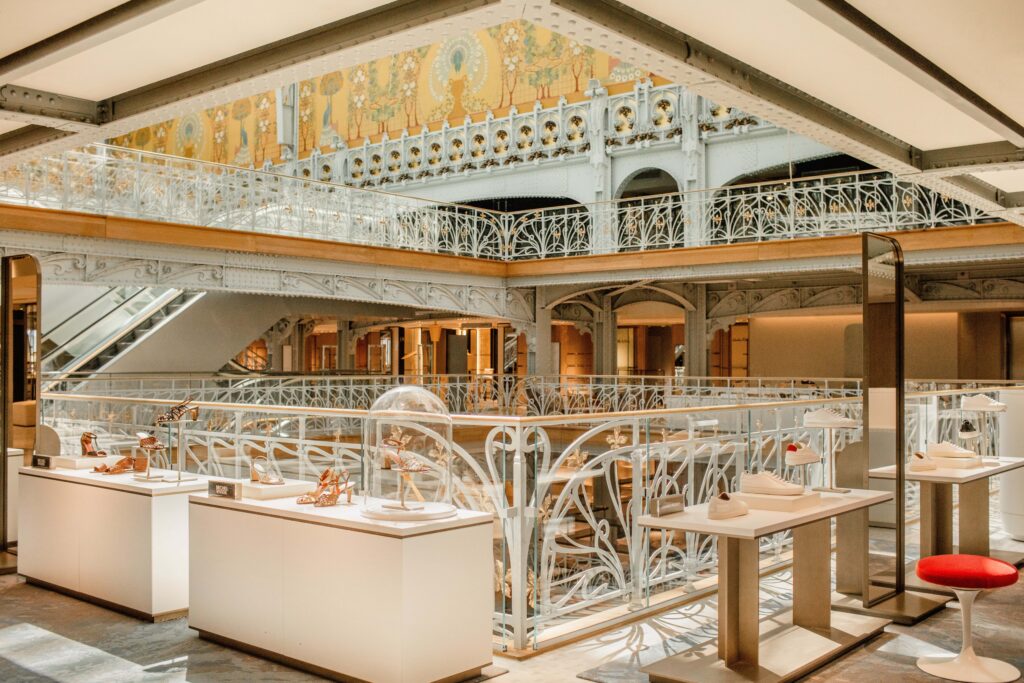