At the time of the interview, Milan was emerging from “incredible pollution”. A great gust of wind on top of all that, and the city was livable again. Patricia Urquiola was born in Oviedo in Asturias and her childhood is linked to the memory of places, shapes, smells. Its reference scent is Cantabria, beaten by the winds and spray of green Spain. Its spirit, like the Basque Country and its Pyrenees, is Atlantic.

Girl, in a sibling of three children, she knew how to find her place between an older sister married to an architect and a younger brother who worked in a bank.. She was “the one in the middle” , the one who has to adapt, a typical case between an engineer father, Basque, who moved to Asturias and a mother specialist in philosophy and English philology. From her father, she retains the image of an attractive, magical man, “not at all authoritarian” , a “bello” character, in every sense of the word: handsome, generous, open-minded.

For her education, in the 1970s, she went to the Ursuline School of Oviedo, with as teachers the sisters who wear the headdress but who in the afternoon did not hesitate to pull up their skirts to have a little exercise to their attentive pupils/pupils. To become what she wanted to become, an architect, she had to leave Asturias for Madrid where she joined the Politecnico. “My whole family is a family of architects, my cousins, my uncles… my father was a failed architect. I had to get away. I had to move. Two, three years in Madrid and I left to do my pre-Erasmus in Milan, a much more complex territory. When I arrived in Milan, I discovered more complex subjects such as design and I positioned myself between architecture and design at the Politecnico of Milan. I have always been a ‘good’ student. I studied but I also helped others a lot to finalize their project. I strongly believe in mutual aid, in collaboration which gives everyone the opportunity to do something. You have to move, move, go see, don’t hesitate to go to Japan, America, to explore new territories. Don’t hesitate to step out of your comfort zone. »

Language is not a barrier for Patricia Urquiola. She learned French when she was 6 years old and if she thinks in Italian, she dreams in French, Spanish or Basque. Its first conductor was a woman, Maddalena de Padova, with whom she collaborated for five years. But as she lacked a bit of air there, she didn’t hesitate to go to Piero Lissoni, where she was responsible for the design. “He has become a friend, and collaborating with his office (80 people), a real pleasure. »

Her second ‘first client’ was also a woman: Patrizia Moroso with whom she developed her first armchair (the Fjord) which gave her great self-confidence. Among the first projects on which she worked, we must mention the Mandarin Oriental Hotel in Barcelona, which made her approach the complexity of a hotel. “Maria Reig, with whom I collaborated on the project will remain a great friend for life. It was she who raised me to the complex dimension of an architectural project. I also like to work on ephemeral projects. These are dimensions, scales that are part of my life. » 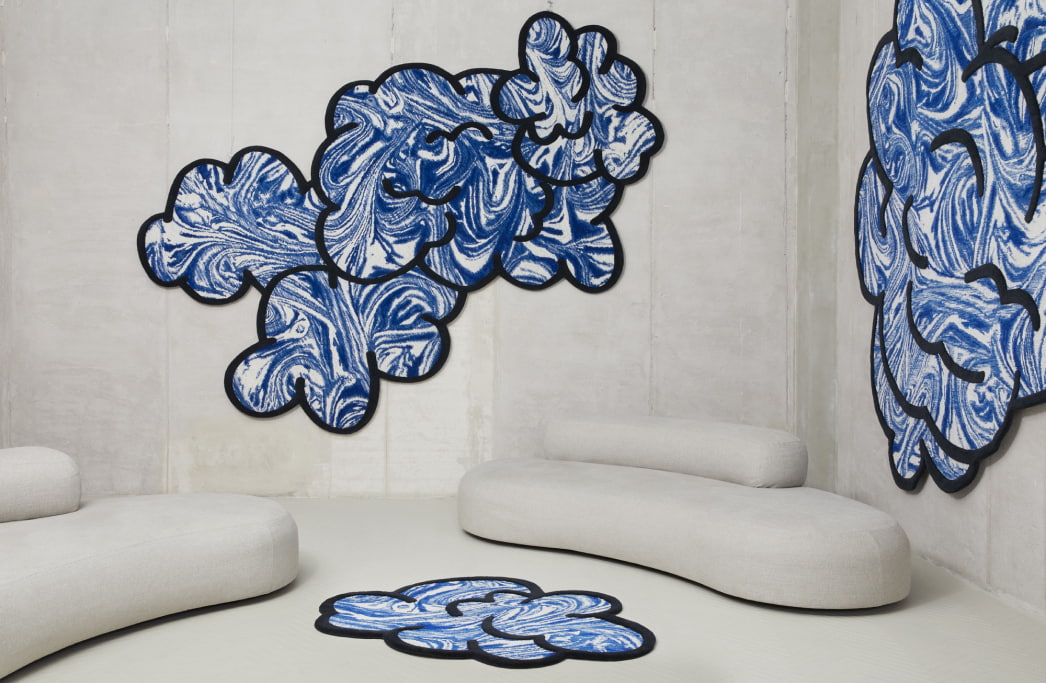 In 2001, Patricia Urquiola opened her agency with four, five people, a human size. The office now has 70.” It is not a contradiction in relation to dimension. I always do more design and always more architecture. But this involves more management personnel. During the pandemic, many projects were frozen. But it was an interesting and strong experience for the close team. My house sticks to the agency and this continuity was easy to manage. »

In 1995, she had a daughter Giulia and ten years later Sofia, whom she took a lot on her travels. “We grew organically. The teams work in close collaboration and the research of materials is fundamental with a double access for the design. It is a beautiful thing for my work. I worked with many companies with the joy of seeing the samples and the first prototypes. We all need to do a lot more and we can do a lot more.” 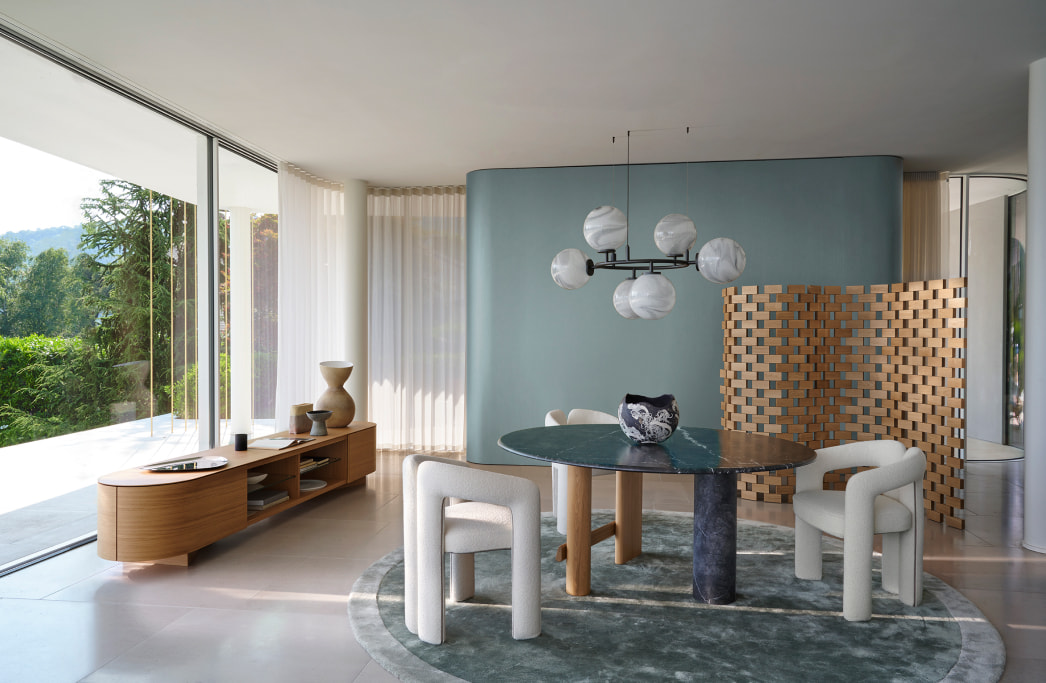 “I often cite Achille Castiglioni and Vico Magistretti as my mentors. But after these two years of pandemic, we must realize that we are in a new youth. It is today the space of the revolution which is associated with the youth. In the period when one is learning, one can speak of a mentor, but life has become more complex, broader. I really enjoy reading writers Gianluigi Ricuperati and Hans Ulrich Obrist who recommend never letting anyone say you’re eclectic. Eclectic is a limiting word and you have to know how to let yourself be solicited beyond our sector. Curiosity is essential and infinite today. »

Patricia Urquiola supports the idea that the cooperation and solidarity naturally practiced by women within their families are the way to reform civil society. She is curious about Björk and her musical approach to space. She dreams of being a producer like Donna Haraway and does not hesitate to quote Legacy Russell who invented Glitch Feminism, which embodies error as a disruption of the gender binary, as a resistance to the normative. 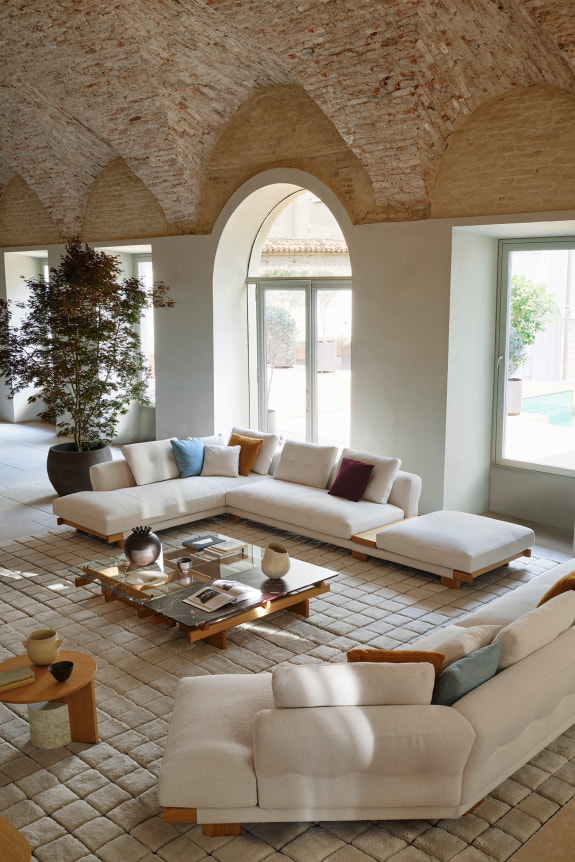 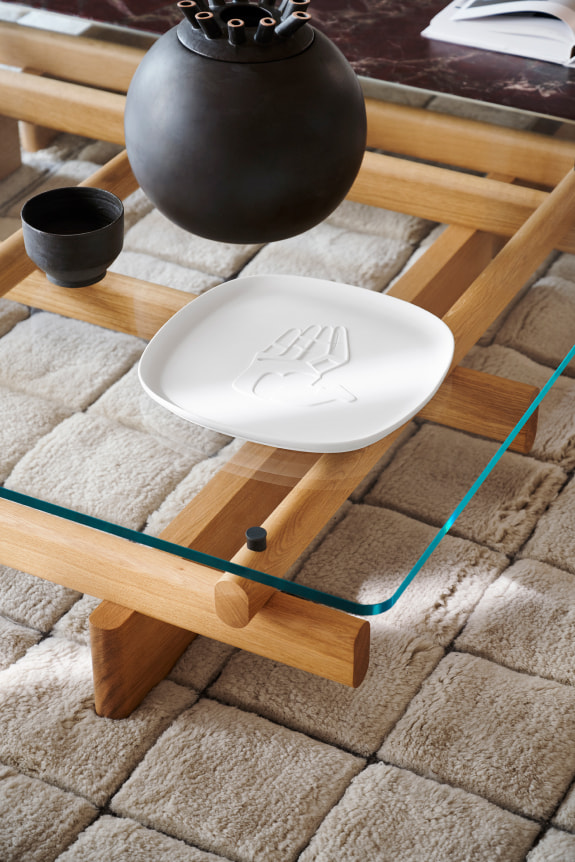 “When I was doing my ‘thesis’, I associated In Search of Lost Time from Proust to my descriptions and I described the houses like Marcel Proust that I read in almost every language. The characters of a house are the philosophy of the house. It was Patrizia Moroso who introduced me to the forest and to art with this expansive aspect of nature that overwhelms everything like a blob. I held conversations with Cassina to highlight the work of Charlotte Perriand, a great nature lover and always on the edge of habitat research. At the Palais de Tokyo, I like to go and draw the Patti Smith energy of an Anne Imhof who makes perform on the same space-time, actors, falcons or drones. »

Moving from art to philosophy, from bio-mimicry to biology, from digital to life sciences, Patricia Urquiola functions as a ‘toolbox’ and her relationship to the world is only considered through her relationship to others and Conversely, how others are for her. This fluidity, she draws it from the plant world and her ambition is to put materials back into a circularity. 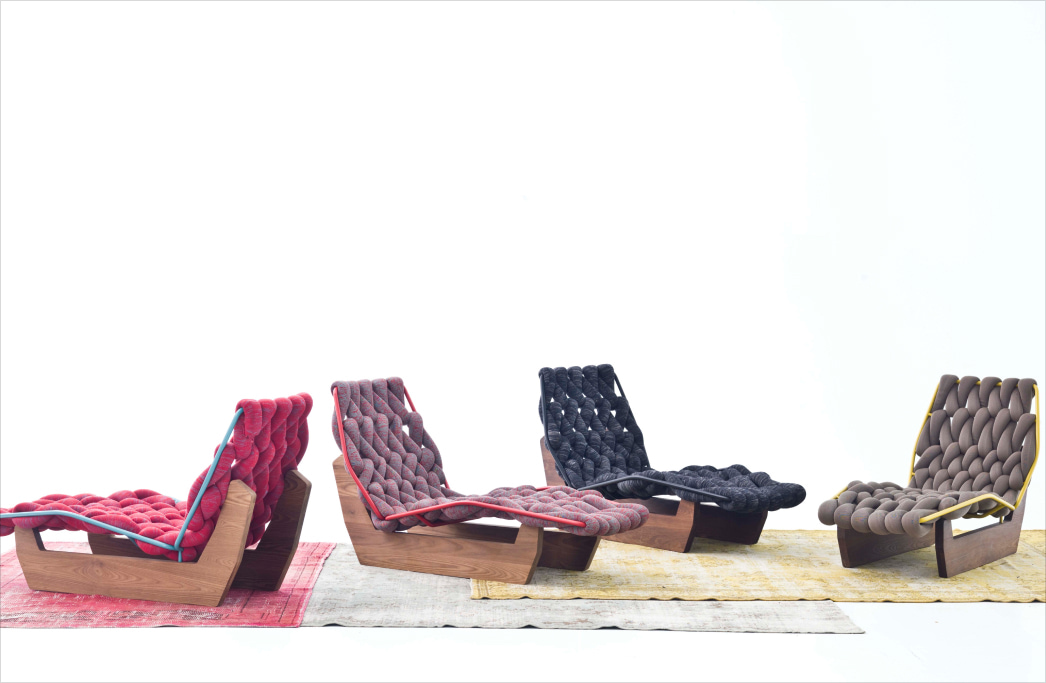 “During this pandemic, we have lived with blinkers, like workhorses. We have to broaden our vision, open our eyes and revise our approach to things and see how everything explodes. Different fields are fundamental. There is no algorithm that rules the world. The most advanced phase of our journey is perception. We must keep our most open antennas like biologists or philosophers who work to redevelop public spaces. I work with Mutina on the surfaces and accompany them in the relocation of their head office. In Capodimonte, Naples, I work on a botanical vision of porcelain by working from the mold as a base. I slide a wood around. » 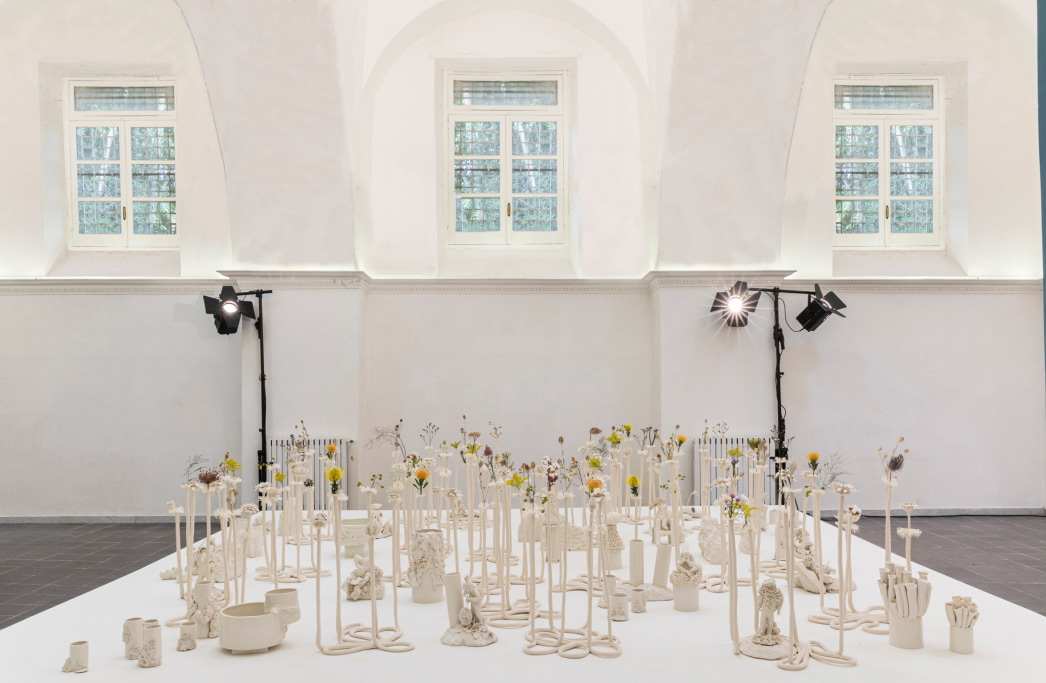 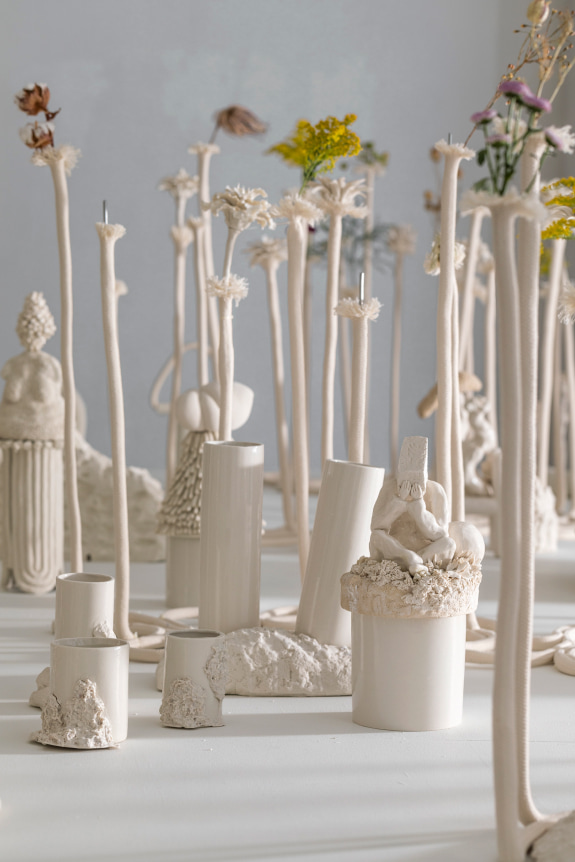 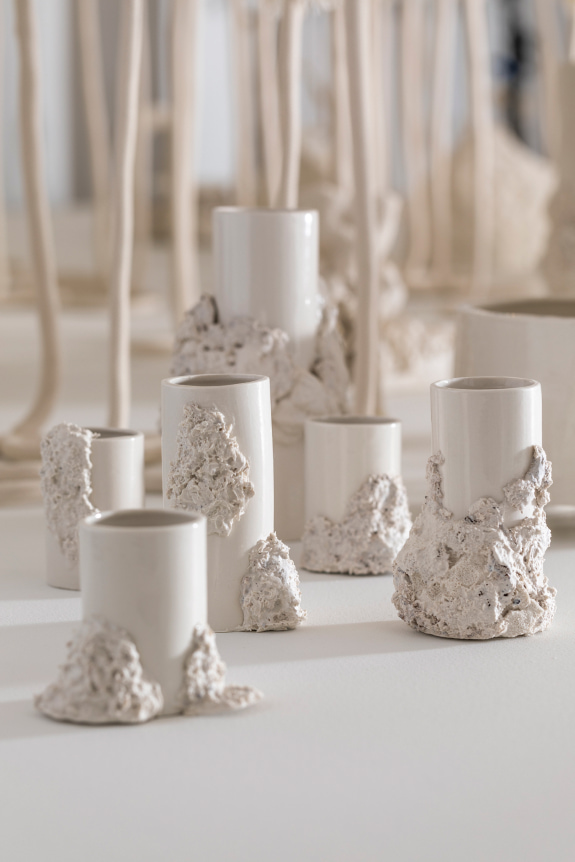 Cecilia Alemani, the new curator of the Venice Biennale of Contemporary Art, has also chosen ‘Milk of Dreams’ as a theme, which takes up notions of the representation of bodies and metamorphosis, delicately while at the same time carrying out the work of architectural renovation. “My work happens at different paces and different intensities. My art direction work is the one that takes me the most time and can run over two or three years. We have to put the temporalities back into a real vision, give messages of proximity to the team while making the effort to work remotely. Being close to those who make 3D means picking up the phone and talking to them. An image cannot be frozen. We need to have a lot of space to reason our work and broaden our vision. Digital has broadened our vision, opened our horizons. We have to get into this digital. In February 2019 there was a five-part Mostra on my work in Madrid. The last part on “positive contamination” also included a project with Federico Pepe, ‘Don’t treat me like an object’ in a tiny space with an augmented reality headset. How to broaden this experience? We entered a community of chairs dancing flamenco provoking a mix of emotions. We are here in the overwhelms me. I advocate this expanded curiosity from biology to art. »