Skip to main content
Design / Interior architecture / The lab / Jean-Philippe Nuel: “We must not forget the hotel as a space for socialization, we must immediately say that after the crisis will remain the ambition to share better”

Jean-Philippe Nuel: “We must not forget the hotel as a space for socialization, we must immediately say that after the crisis will remain the ambition to share better”

Will we go to the hotel – these are gradually reopening – like we used to? Certainly not, if we are to believe the architect Jean-Philippe Nuel, very prominent for his many development projects in the hotel sector. Short and long-term changes, social distancing measures, upgrading of the bedroom as a protective space, hygienic materials and environments, the rise of contactless … guest of the second webinar organized on April 30 by French Furniture and Intramuros magazines and Courrier du Meuble, the person concerned gave his thoughts in all directions on the changes in the sector.

What will the hotel look like, according to the time-honored expression “from the world after” the Covid-19? We know that, with confinement required, the vast majority of hotel establishments are now closed, and that customers will only return if they are assured that they are not at risk of contracting the virus. For Jean-Philippe Nuel, guest of the second French Furniture webinar organized a few days ago, customers are now expecting changes, which the entire chain of stakeholders, from the owner to the construction companies, must hear in order to provide appropriate responses.

A context of transition

As an introduction to his speech, Jean-Philippe Nuel mentioned the very specific context we are currently experiencing. Due to confinement, hotel projects are at a standstill, while the uncertain economic outlook has led many decision-makers to interrupt projects which are in the study phase. This provoked for the interior designer a reorganization of work: part of the employees of the agency – which employs around forty collaborators in normal time – was put on short-time work, while the others adopted a functioning teleworking. The attitude of the contracting authorities is nevertheless very different in relation to the crisis: while some play it safe, and put themselves in a position of waiting, others, on the contrary, are very proactive, and take advantage of this period of time. ‘stopping the activity to reinvent their establishment, and offer a fresh perspective to customers who will return after the crisis.

For the interior designer, there is no doubt that the health crisis will have a profound impact on the hotel industry, but according to him we must distinguish what will change in the short term and in the long term. “The hotels will have to immediately make arrangements to guarantee the safety of customers and ensure that the hotel is not a place of Covid-19 contamination. The barrier measures imposed by the public authorities will therefore be implemented and adapted to the hotel context, namely respect for social distancing, screens to separate diners at the table, perhaps paths to prevent people from crossing paths. , the elimination of buffets which create proximity, etc. It’s a real change of course because for years, the movement has been on the contrary in the direction of conviviality, the sharing of spaces, whereas it is now necessary to compartmentalize. “ Since these measures are short-term, hoteliers will be particularly interested in arrangements that are both simple to carry out and economical.

“On the other hand, this crisis is creating a precedent, which means that there will be a before and after Covid-19, which will generate new expectations from customers. From now on, in a long-term reflection, it will be necessary to integrate the health component into the installations ”, adds the interior designer. If the concrete translations will be specified later, we can think that the large dining rooms will be fragmented into smaller more protective spaces, which we can arrange in a modular and flexible way. We can also envisage the development of a whole “hygienist” paradigm. »- with clearer atmospheres, attention paid to the quality of the air, right down to the healthier content of the plate – which promotes well-being, and is aimed at the unconscious of customers for whom the health has become a major concern.

A new status for the room

In this context, Jean-Philippe Nuel foresees a return to the foreground of the bedroom: “After having invested a lot in the common areas, we will once again take an interest in the bedroom as a private space, which will become a protective cocoon for the traveler, and a multi-use living space” . In other words, we will not only sleep there, but also concentrate on a set of activities such as eating meals, receiving visitors, organizing a dinner, or even a home cinema session. The bedroom will also become a one-off workplace, where we can have a micro-meeting, or a videoconference session with the whole world. In summary, the bedroom will offer more and more possibilities, with features that join those of a second home, not just for a single person, but for a family.
“In recent years, the hotel has been mainly oriented for business trips, and not for families, which partly explains the success of Airbnb-type rental platforms, but that is likely to change” . These new expectations will probably translate into larger rooms, with versatile arrangements, such as a multifunction table, in the middle of the room rather than against a wall, so as to have breakfast as well as to work alone or with others. . We can also imagine retractable beds to accommodate families, or even removable partitions to separate spaces, create a volume for children, or an area devoted to morning gymnastics … “Once the crisis has passed, we must not forget the hotel as a space for socialization, we must immediately say that after the crisis will remain the ambition to share, to share better in fact. “ 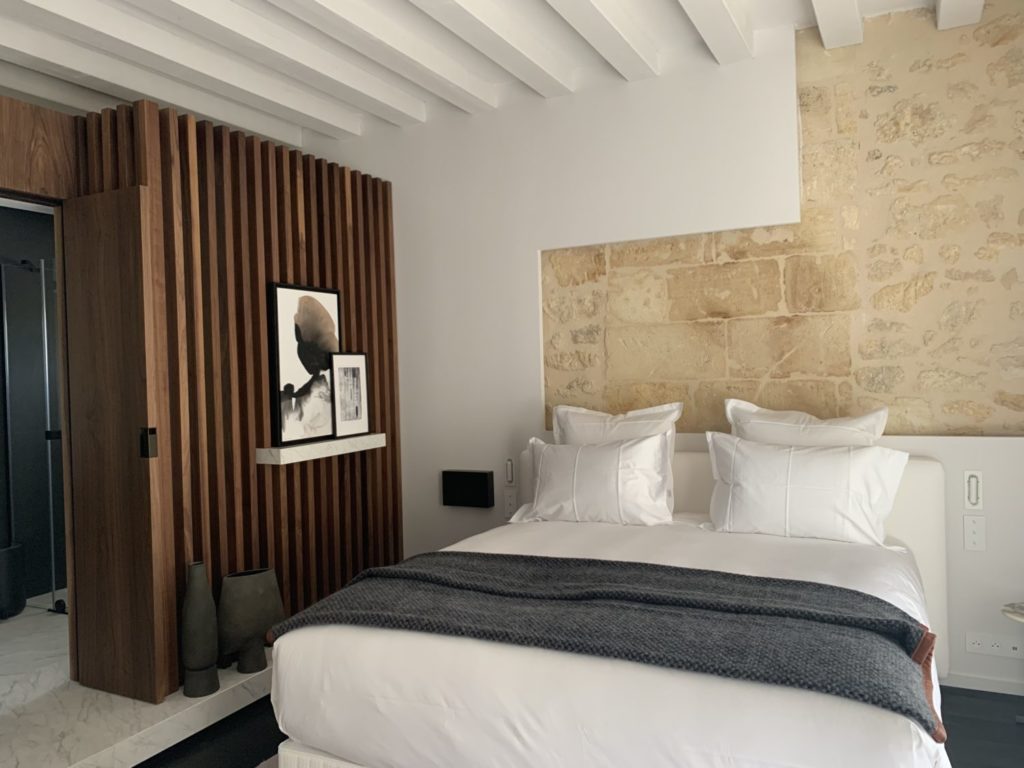 The Covid-19 crisis will certainly also direct project managers towards materials with a hygienic dimension, in other words easier to maintain and disinfect. “The choices will go more towards hard materials such as glass or plexiglass for the vertical walls, or parquet type for the floors, than towards carpets or textile coverings, adds Jean-Philippe Nuel. Likewise, all the accessorization with libraries filled with books and decorative objects, created to be closer to the habitat, will evolve towards more sober, more stripped-down arrangements for easier cleaning. “ In this context, “contactless” technologies have a bright future: it is already possible today to open your hotel room without a key and without contact, with your smartphone, a technology that will spread; it will be more and more common to open the sanitary door without contact, to have light thanks to a presence detector, to use automatic taps, etc. This field of hygiene will be subject to innovations, as shown for example by a French company which has launched a hybrid luminaire: in addition to lighting, it can emit ultraviolet radiation at night, derived from processes used in hospitals, which deactivates the infectious nature of viruses. Be careful, warns the interior designer, these changes must not come at the expense of sustainable development: “Customers perceive that the health crisis is linked to the excesses of overproduction and the degradation of the environment. Eco-design and the use of bio-sourced materials will be increasingly important arguments for hoteliers, to show that they have understood the environmental issues, at the same time that they can be a formidable driver for any the economy. “

A playing card for French manufacturers

In a context of reinsurance and research into short circuits, French manufacturers and contractors will benefit from the local partner premium. “The contracting authorities will be subject to new constraints, to integrate the changes while respecting the projects, the costs and the opening times,” explains the speaker. Project managers and manufacturers must therefore now give them the best possible answer to their problem, which is not only based on price. We know that French manufacturers are not the cheapest, in particular because of the high wage costs, but they will have a good card to play if they can offer a quality of service and a quality of service. “ Manufacturers and fitters must today claim a position of expert in materials and specialist in the implementation, a set of know-how which is invaluable for the challenges which are to be taken up by the contracting authorities and the project managers. ‘artwork. French manufacturers and fitters could meet to establish specifications for the attention of prime contractors, which could help the latter in the design and securing of their projects in terms of quality and deadlines.

In conclusion, Jean-Philippe Nuel considered that the crisis can be an opportunity to correct certain excesses of recent years: “With the rise of tourism, we have tended to massify hotel consumption, perhaps focusing too much on quantity to the detriment of quality. The pandemic means that we will travel less in the months and years to come, which can also be an opportunity to travel better, with a hotel offer more concerned with the well-being and health of customers. “ Less “instragramable”, therefore perhaps also less superficial, the hotel of the next world could well refocus on being more than on appearing, and offer tomorrow’s travelers an experience that is both rarer and more rich.