Capital of Culture 2022, the Luxembourg city of Esch-Sur-Alzette has notably chosen to highlight the connections between digital design and the heritage history of its mining area through two exhibitions highlighting the impressive converted industrial site of Esch Belval. . An interaction of multimedia and architecture that induces a very current principle of “remix”, in a striking aesthetic mixture between yesterday’s and today’s realities.

Impressive. This is the first thought that grabs the visitor when he arrives at the site of Esch Belval, a large industrial wasteland converted into a cultural and university site, where still sits like a majestic sleeping giant one of the enormous blast furnaces that has made the reputation of Luxembourg steel and in particular that produced in the border city of Esch-sur-Alzette. Today, the steel dimension of the site has lived. But the great opportunity given to the city to enhance both its past heritage and its current artistic and creative dynamic, through its nomination as European Capital of Culture 2022, finds its full dimension in the two flagship installations hosted by the place on this occasion. 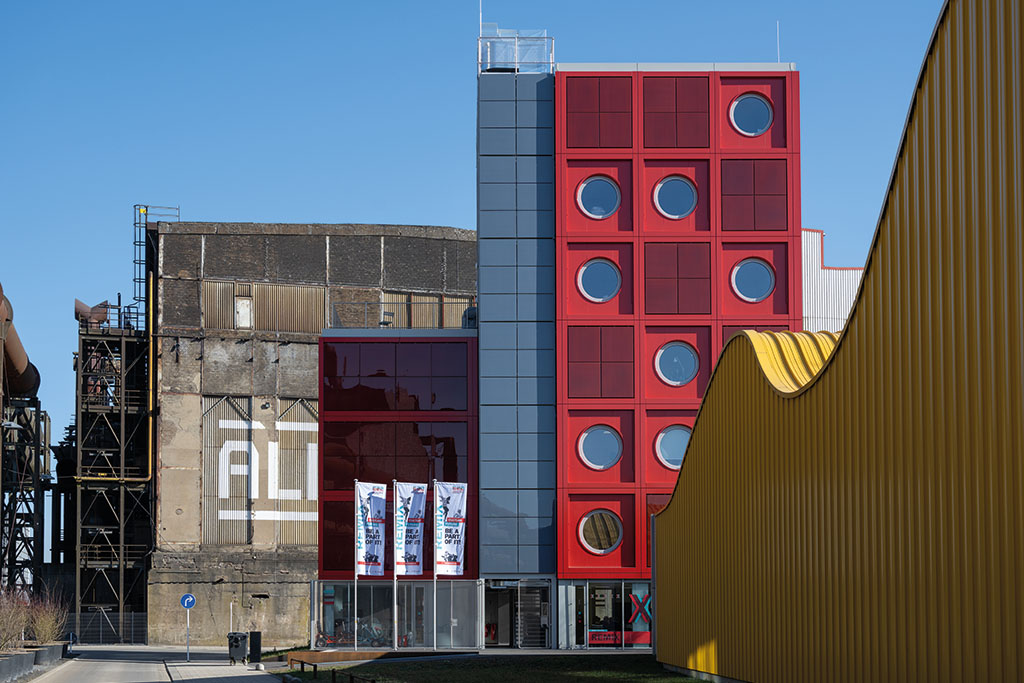 Identity and diversity on the grill

Conceived in partnership with the ZKM in Karlsruhe, a temple of German digital art itself located in a former industrial complex, the “Hacking Identity / Dancing Diversity” exhibition offers at the heart of the gigantic building of the Möllerei (a large volume built in 1910 and which was originally used to prepare iron ore and coke charges for the nearby blast furnace) an intriguing convergence of old to new, highlighting very current societal issues whose digital creation likes seize (issues of identity, diversity, manipulation/use of data). “Hacking Identity / Dancing Diversity” scenography therefore in the immense structure 25 installations whose gaze, although set in the past land, resonates with a strongly contemporary dimension, like the enormous digital fresco which serves as a point of reference. immediate visual on the large central walkway.

Long parade of virtual animals on a screen of several tens of meters marrying the disproportionate dimension of the places, the Marathon Der Tier (Animal Marathon ) by Germans Rosalie and Ludger Brümmer draws inspiration from late 19th century radiography, fluoroscopy and chronophotography to track down the timeless. Its art/science inspiration sticks to the technical dimension of the place. A very popular axis of current digital arts that can also be found on the lower level, in the strange robotic sculpture Deep And Hot by Thomas Feuerstein, linking machinery and biologism through this industrious form of the reactor, studded with polished spheres referring to the molecular dimension of life. 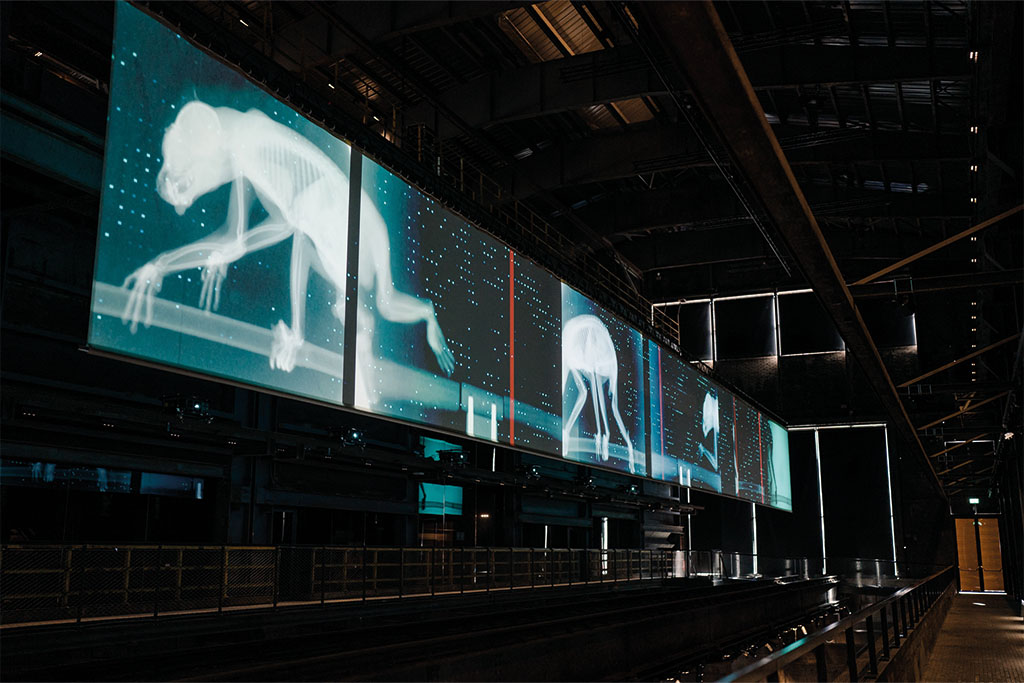 It is at this level that the vast majority of the rooms are located. In particular, we discover the intertwining of the grandiose complexity of physical space with the more interior complexity of the human, through the installation with facial recognition technology. Captured by the Finnish Hanna Haaslahti: a strange chaotic ballet of avatars on screen, captured from a camera scanning the voluntary public, and inducing a reflection on the way in which violence is exercised and perceived within a group of individuals. 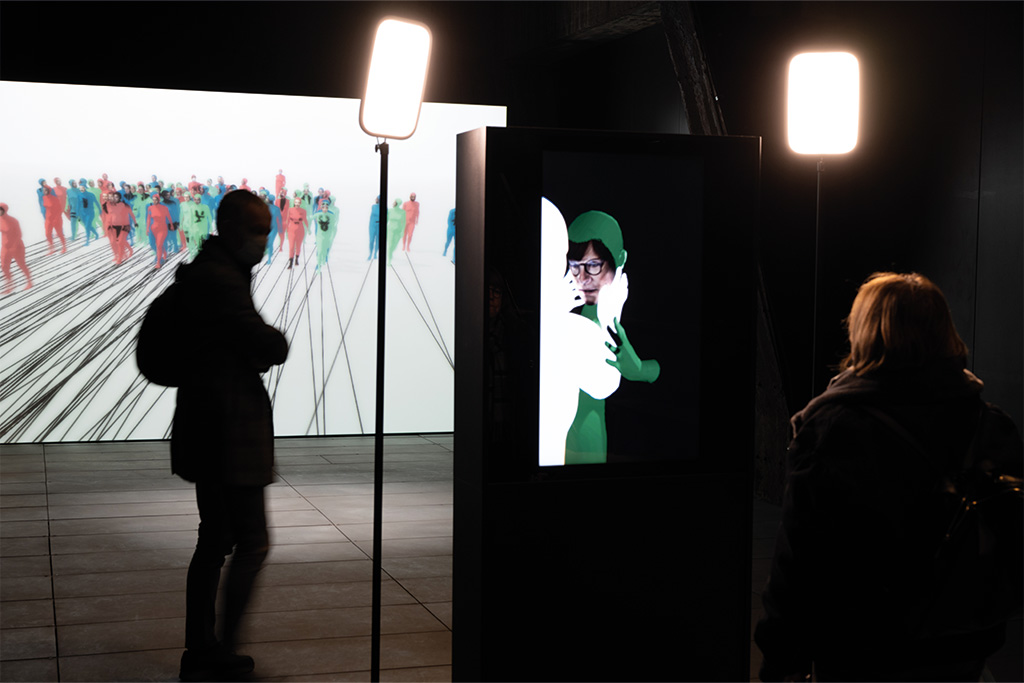 The feat of technological integration in an immersive architectural environment that is still very industrial continues in the basements of the Möllerei. The impression of descending into the internal organs of the factory is very strong as the decor remains brutalist. And this is where we discover the most curious piece: the Formae X 1.57 from the German digital design studio Onformative. This cupola with variable colors, placed on the slag, reacts to the atmospheric modifications of the place (light, air humidity), but also to the movement of the public. A common score between man and machine that makes sense. 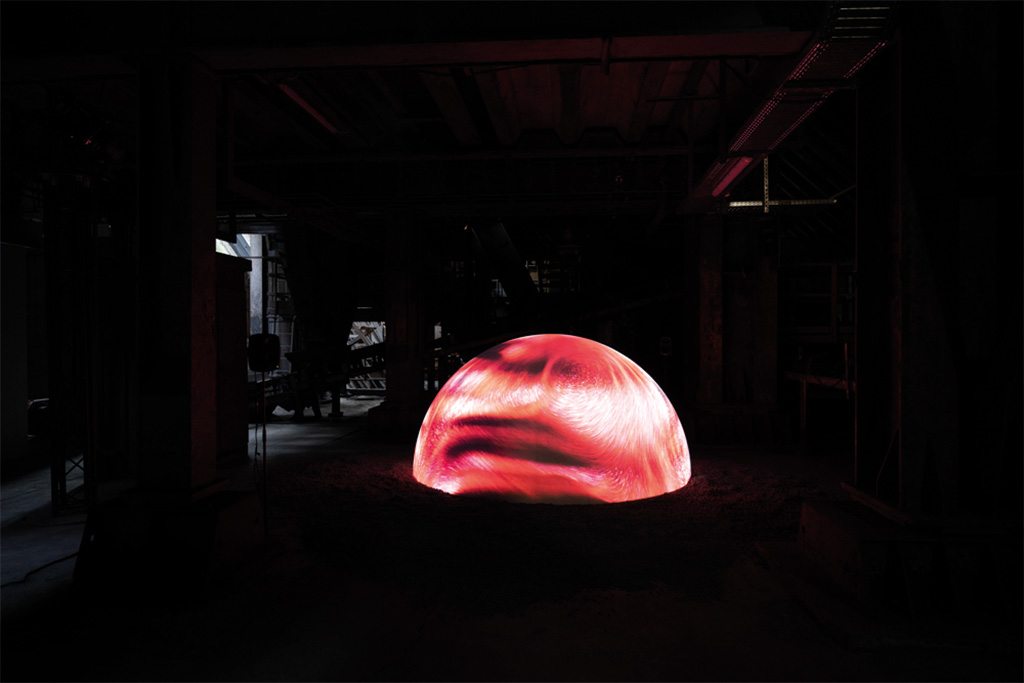 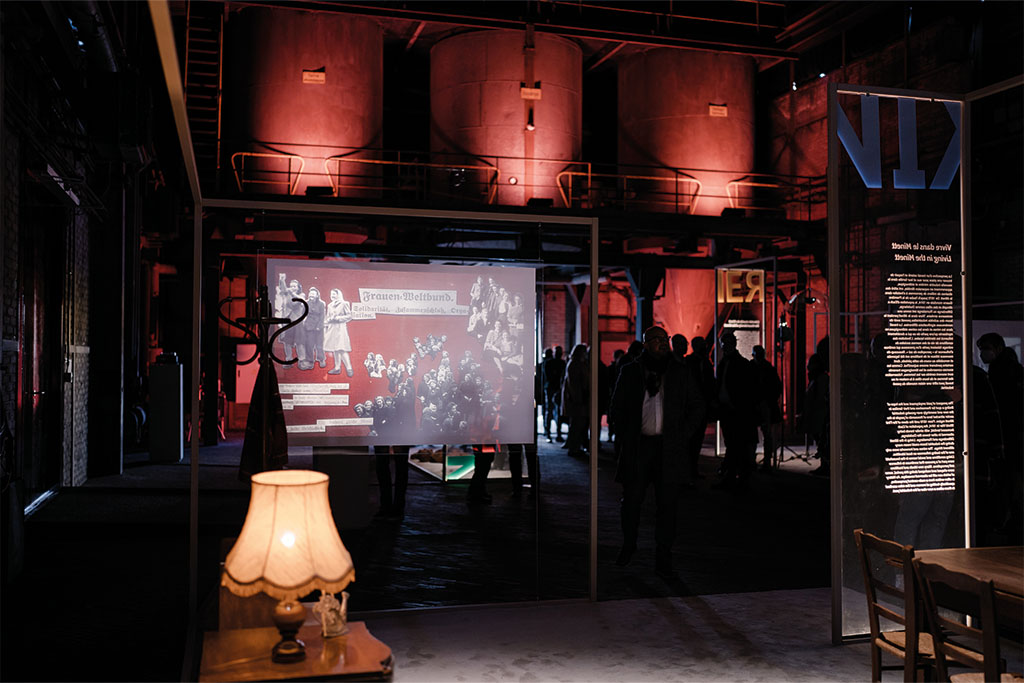 Set up in the Massenoire, a building that housed the various equipment used to manufacture the taphole plugging mass (based on tar), the device here offers a more concentrated but equally spectacular collision between heritage and creation. digital. Due to the work of the collective of Italian artists and designers Tokonoma, in collaboration with their compatriots from the interior design company 2F Archittetura, the installation reveals a myriad of multi-sized suspended screens and thematic boxes resonating with places still very permeable to their industrial past. The highly structured entanglement of the various multimedia elements in this space, also preserved, where the machines are still in place, delivers a captivating and totally lively scenography. On screen or in soundtrack, archives and sound effects of the work of former miners and workers highlight the human tone and the perpetuation of a work of memory particularly highlighted. 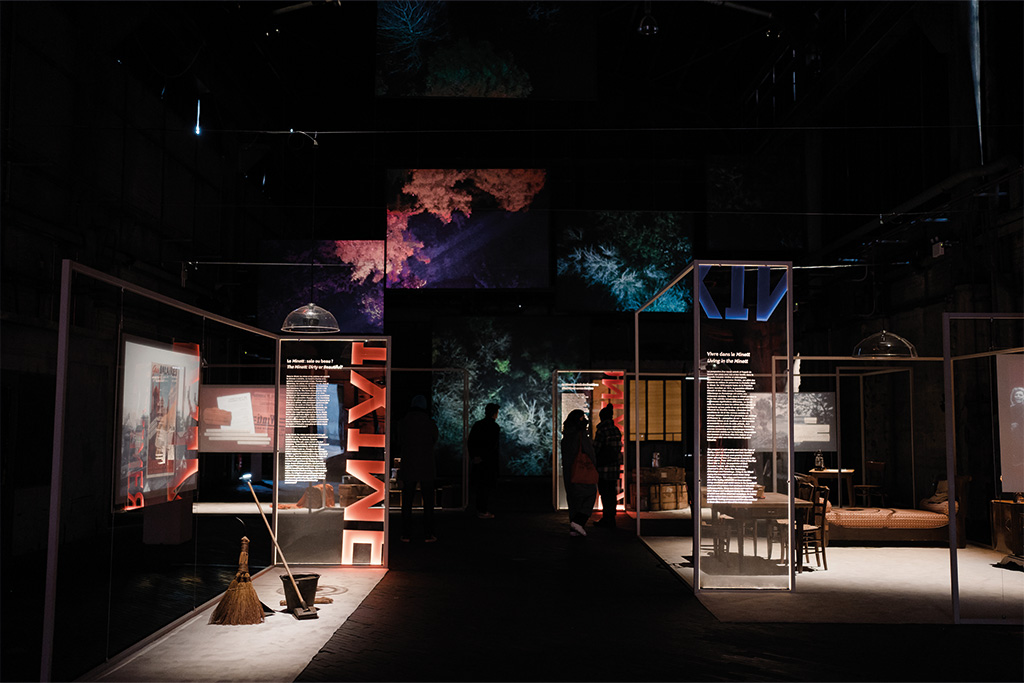