Forms of Transfer: new exhibition at the Magasins Généraux

Until March 13, 2022, the Magasins Généraux in Pantin are celebrating ten years of the artistic residency program within the manufactures of the Hermès house. The French component of a major event also taking place in Seoul and Tokyo, “Forms of Transfer” reflects the fruitful dialogues between artists and craftsmen, through an educational presentation of works where art is at the service of hand and vice versa.

The artist residencies of the Fondation d’entreprise Hermès are stays of three to four months that a visual artist, sponsored by great names in contemporary art – Susanna Fristcher, Jean-Michel Alberola, Michel Blazy, Robert Deacon or still, among others, Giuseppe Penone –, performs in his factories. To name a few, La Maroquinerie Nontronnaise in the Dordogne, Holding Textile Hermès in Lyon, Cristallerie de Saint-Louis in Moselle, Puiforcat in Pantin, and La Maroquinerie des Ardennes welcomed around 30 designers between 2010 and 2020. During this immersion, the latter are led to experiment with new production methods and use four exceptional materials – leather, crystal, silk and silver, depending on the specificity of the workshops -, to produce works in duplicate, one being kept by the Foundation, the other belonging to them. “Come without any prior project ,” explains Gaël Charbau, curator of the exhibition., the visual artists opened up to the skills of the craftsmen, in a relationship tinged with reciprocal wonder and observation. » 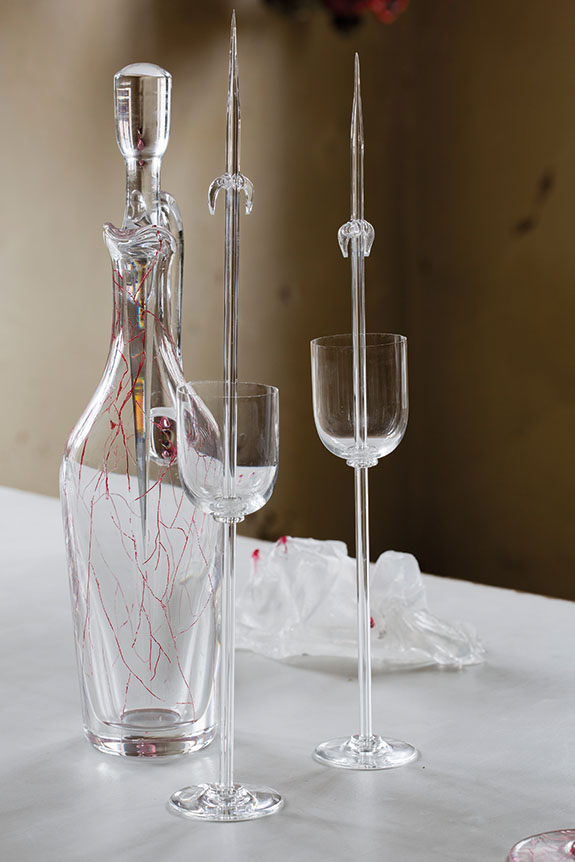 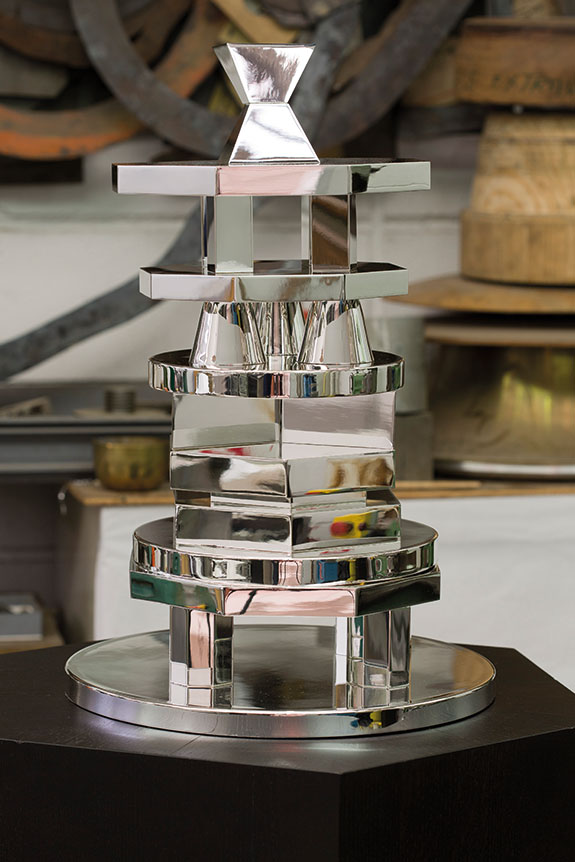 Oh You Kyeong, The Pagodas of the Moon, 2013 © Tadzio Fondation d'entreprise Hermès

Art and matter in forms

In a colorful scenography compartmentalizing the Plateau des Magasins, the exhibition demonstrates the richness of this collaboration, through pieces of which the didactic booklet, delivered to the visitor at the entrance, explains the springs. Among many, those of Oliver Beer, in residence in 2012 at the Saint-Louis crystal factory, evoke sound. Among others, his work Outside-In , an “acoustic horn” coming out of a crystal window, allows outside noises to be heard from inside. Installed at the Allan leather goods factory, in 2020, Bérengère Hénin deciphers the remains of a party with Melancholia , a joyful disco ball made of 2000 small pieces of leather, but also La fin de la fête , an installation imbued with nostalgia, composed a pedestal table, party favors and everyday leather objects. 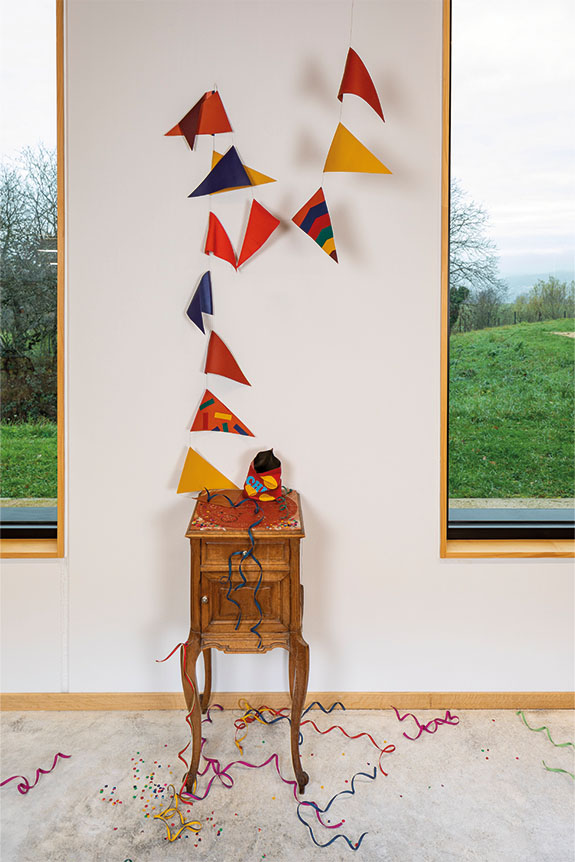 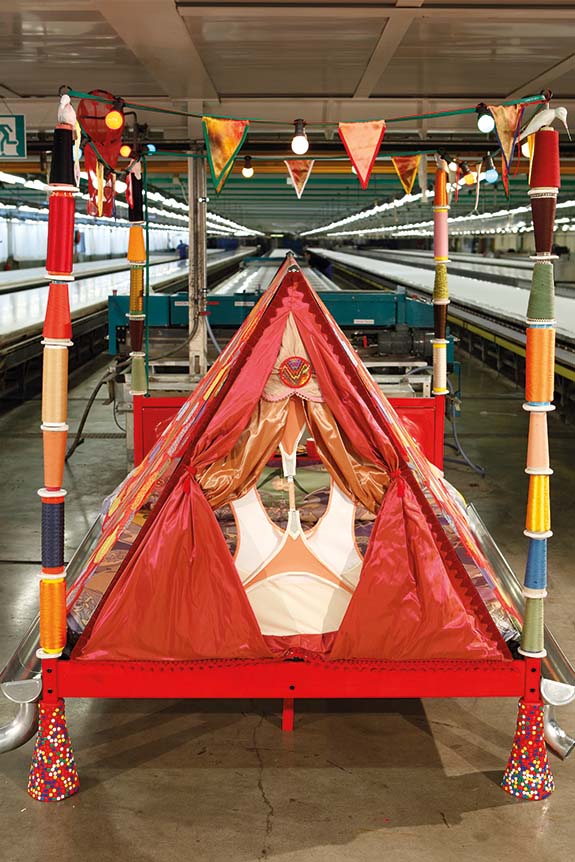 Yet another example, Emmanuel Regent, active between 2018 and 2019 at the Saint-Louis crystal factory, created a series of “glass” watercolors, such as The Shipwreck of Hope, a 3D and crystal version of Caspar David Friedrich’s “Mer de glace” painting, made possible thanks to new technologies. An abundant presentation that questions the porosity of exceptional art and craftsmanship, through all its interstices. 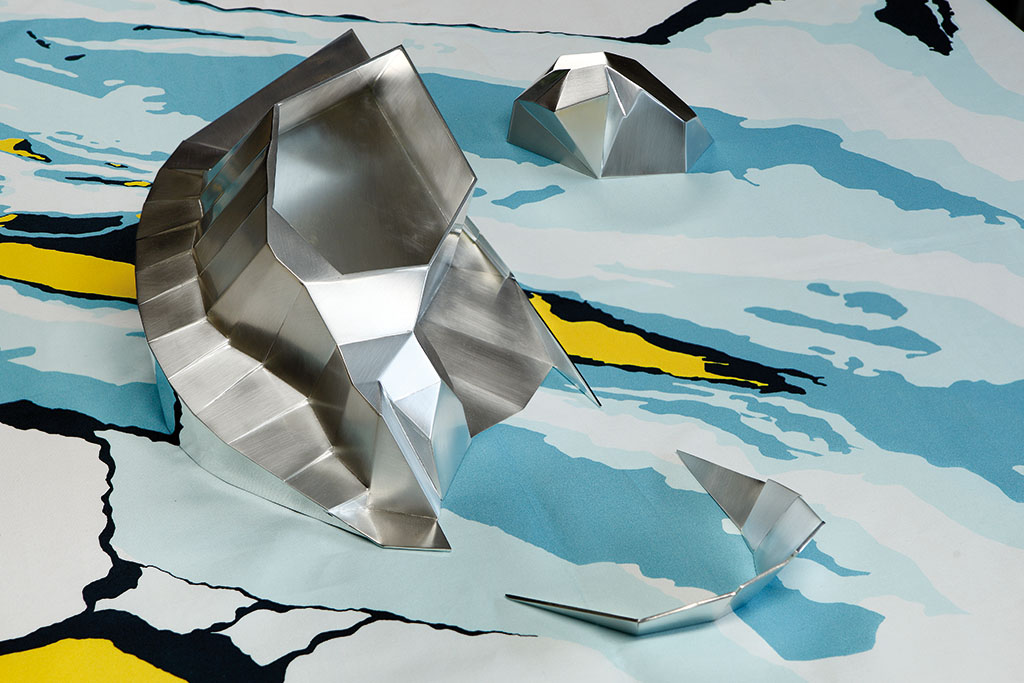