From November 6 to 9, during EquipHotel, Intramuros co-hosted coffee chats with the French furniture industry, on their stand called Interior Design Center. Topics related to the design of hospitality spaces, the change and development of the market were discussed. Find the summary of the exchanges of November 7 around the end of the standards.

To debate, nine interns responded:
While the hotel customer experience is constantly evolving, can we continue to talk about hotel standards today or are we on the contrary moving towards de-standardization?

To open this debate on standards, Alban Ruggiero, president of MELT founded in 2016, defines the concept championed by his group as non-standardized hybrid hospitality. To explain this idea, he evokes in particular his last project carried out with the Briand&Berthereau studio, the Jost brand in Bordeaux: “No two hotels are made the same. We’ve made the choice to never use the same decorators and architects on our projects so that each time we have a new vision of the hotel business.” A vision based on a varied program of hotel services, which is reflected in the design of the spaces themselves, since at Jost, the common areas were thought of before the rooms. And for good reason: at Jost’s, the first floor is a cabaret that offers 4 to 5 events per week in various forms. The accommodation function is also reviewed to accommodate a hybrid clientele: several types of spaces are proposed according to financial means, dormitories, family rooms, luxury suites… This idea of accommodating a diversified public also responds to a desire to promote exchanges between these different populations. 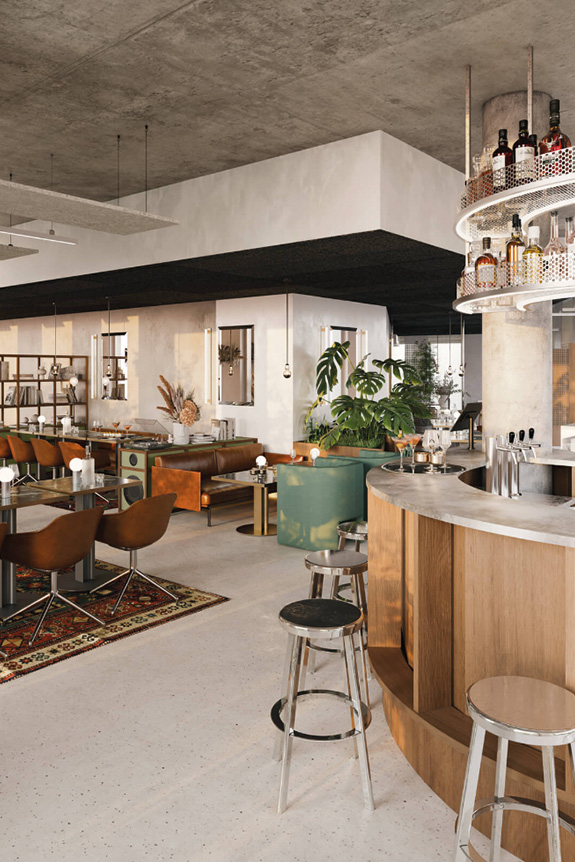 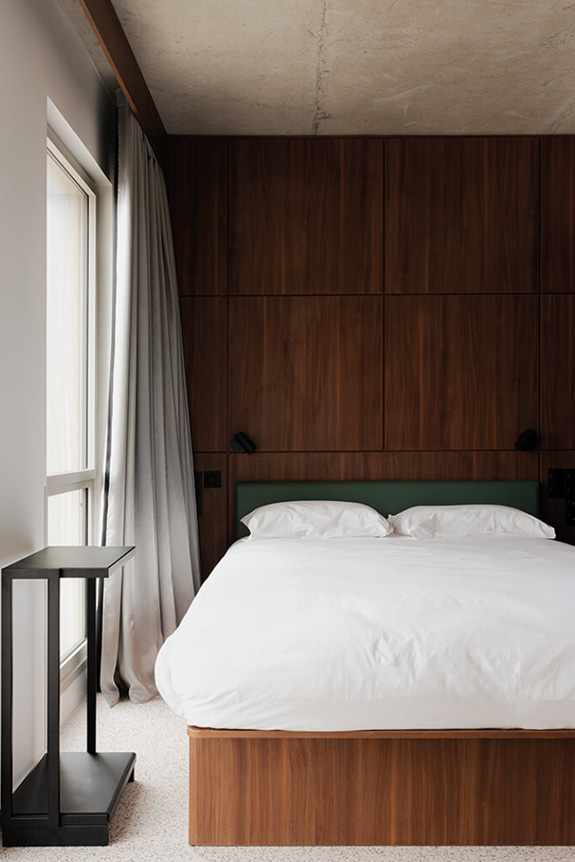 Jost Hotel in Bordeaux, Briand&Bertheraud studio
The interior designer David Dalidec will evoke a search for a hotel experience. “We are gradually moving away from the traditional cell in which we know what we are doing in the hotel. Today we are more in search of emotions and sensations. We are moving more and more towards this development where hotel customers will stay for several days, so we will have to succeed in mixing customers on the same site, so that everyone can integrate socially. 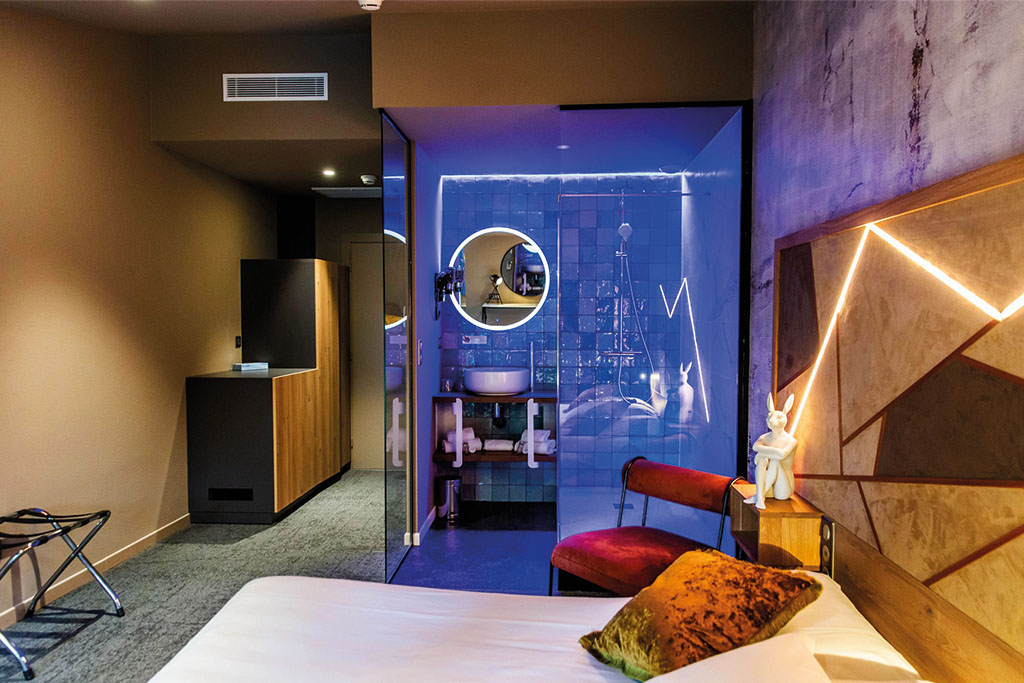 Hotel Château de la tour, studio David Dalidec
With more than 20 years of experience in the hotel industry, with some sixty hotels to his credit, interior designer Laurent Mangoust knows the standards perfectly well, but tends to let them evolve: “The standard is universal in hospitality: you push open the door, walk into a hallway, there’s a bathroom on the left, a closet on the right, a window across the street with a bed, a nightstand and a TV. Still, seeing how standards can evolve, it pushes us to be innovative.” He speaks of an adaptation rather than a re-invention of standards. 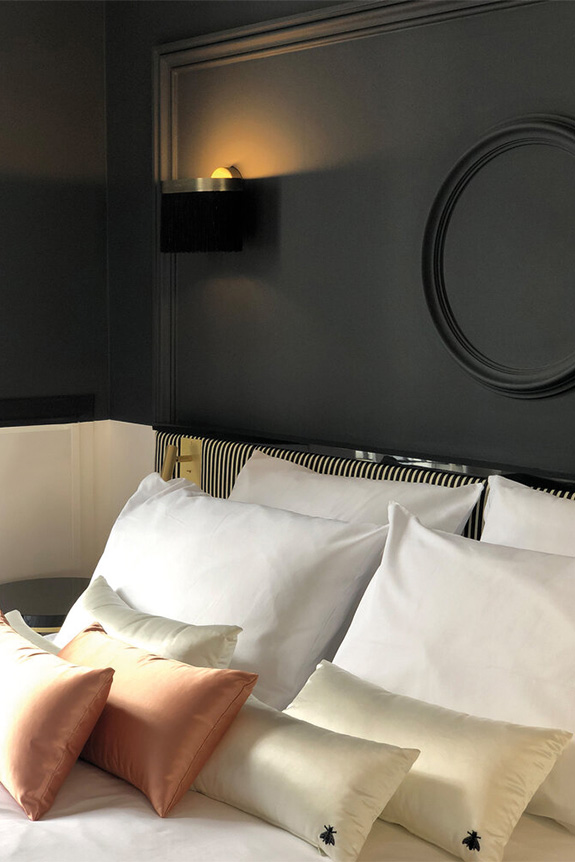 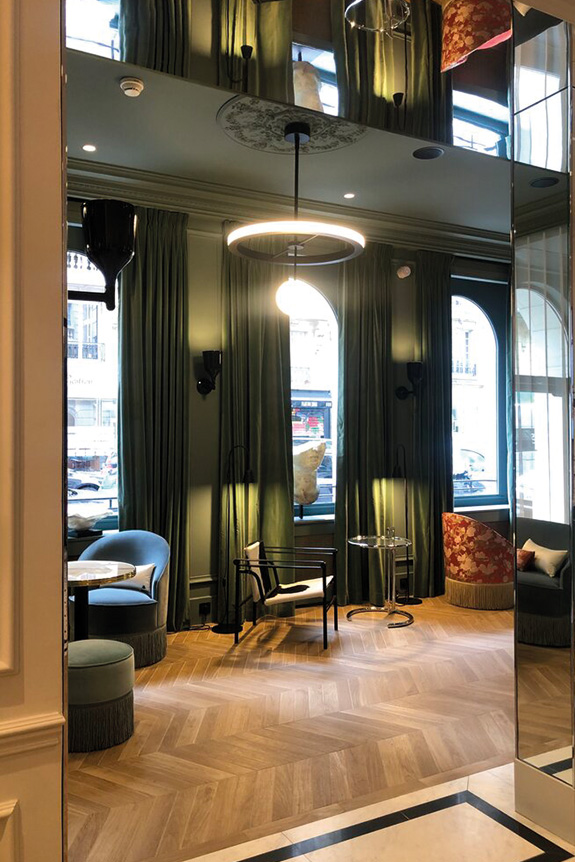 The hotel is no longer a closed shop

The adaptation of the room, the consideration of the customer experience is a direct translation of the evolutions of the uses. Frédéric Alzeari, creative director at RF Studio, talks about the need to reconnect the hotel to its environment: “Today, it’s important to reconnect the social hub to the rest of the city in which the hotel is located, because it creates a link. I don’t think de-standardization is simply aesthetic; it also comes through the experience and services offered.” A point of view shared by Kelsea Crawford, co-founder of the architectural firm CUTWORK, who wants to evolve spaces through the experience sought by clients:“The concept of hybridizing the hotel is the future in my opinion. There are more and more things to consider today and you have to be as flexible as possible in each operation.” Depending on the length of the customer’s stay, we must be able to offer the most complete package possible, for example, by integrating a kitchen area in the rooms. Another challenge they have set themselves is to offer a multitude of uses in a single space, as is the case with their project with Bouygues, where a 20m2 room will be declined and have five different uses.

For Frédéric Alzeari, “to destandardize, you have to get out of the norm. However, he mentions the need to respect certain standards at the legal level on the one hand, but above all to meet the client’s expectations. There are material constraints in terms of bed sizes, the presence of certain furniture or not. Thus, breaking standards can be perilous, as Alban Ruggiero explains: “For all our projects, we define from the beginning a list of functions of the room with a precise vision of what we want to propose to the client. But in the end, what is difficult is to create a room that is new and that when the final result is achieved we can say: yes, it changes and it works.” 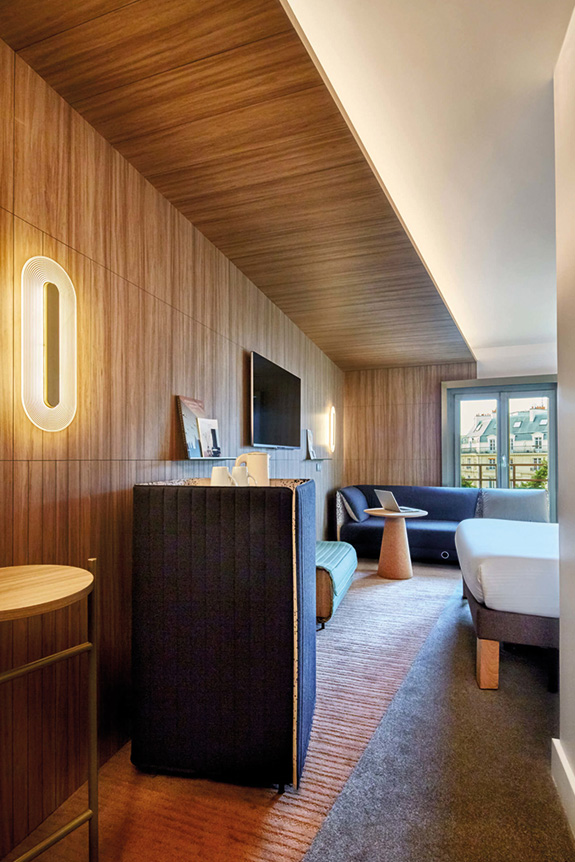 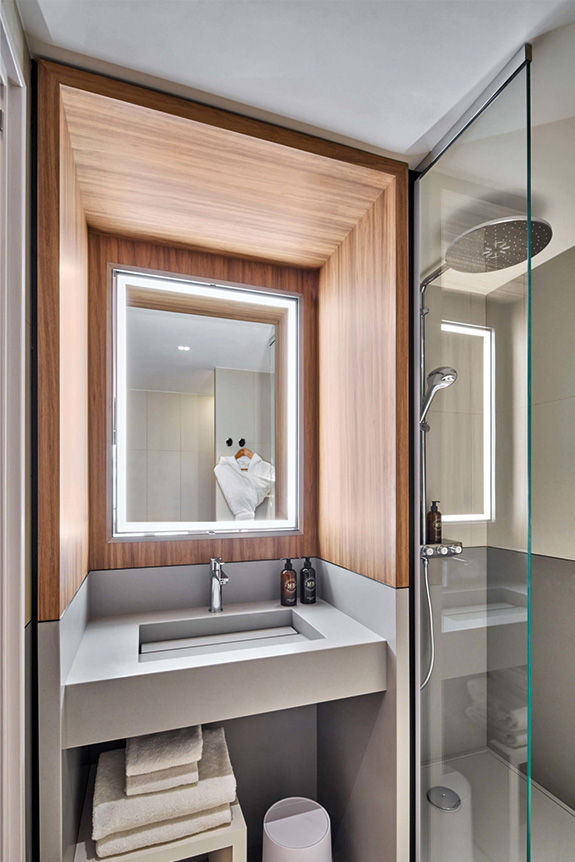 New Novotel Concept, RF Studio
If the majority of rooms remain very anchored in the standards and respect very precise charters (see elements previously cited by Laurent Mangoust), interior architects and designers consider the evolution of uses in this space: we sleep there, we relax there, we work there, we make video, or we isolate ourselves… As Arnaud Berthereau expresses it: “I don’t know what the standard is, and I don’t know if yesterday’s standard is today’s standard and vice versa, but what seems certain to me is that as a designer or interior architect we must be a bit of a catalyst for the uses that are found in hotels and particularly in the room space.” For his mission on the Jost hotel, a work was done on the compactness of the room, in order to propose a space in which the customer feels good and which can have various uses which leave precisely these “standards”. For Laurent Mangoust, the main objective will always be to surprise the customer, by finding a balance between what the customer expects and what he discovers, a balance that will feed his experience.

Towards the reconfigurable room?

Antonin Yuji Maeno of the CUTWORK studio bounces back with a reference to Washitsu, the traditional Japanese standard rooms: “These rooms have no predefined use. They’re not bedrooms, they’re not dining rooms, they’re not working rooms, they’re napping rooms. It’s simply a room that’s open and we’re going to move sliding panels into it and add a futon and a table and then create a bedroom space.” A principle that they have taken up in some of their projects, where the TV could, for example, be hidden behind a panel or revealed thanks to an overhead projector system. These spaces can be adapted to the needs of each customer: “We think that the new standard is Washitsu, that it is re-configurable and adaptable” he concludes. 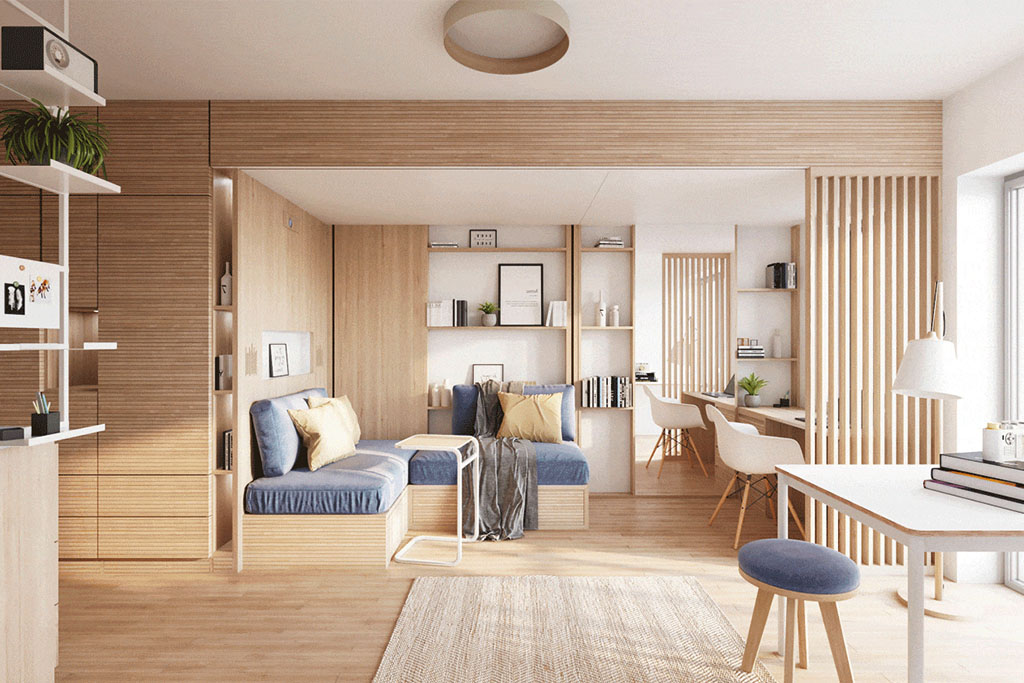 Coliving project with Bouygues Immobilier, CUTWORK studio
In this logic, the work of RF studio with Ligne Roset for Novotel offers an interesting insight, as Frédéric Alzeari testifies: “We thought of the room as not being a fixed object but capable of evolving to match the aesthetics of its time, composed of elements that can be replaced more easily.” This practice leads to a more ecological approach, since the chamber is no longer changed every five years, but rather it evolves continuously.

The ecological dimension in hotel design: an obvious step?

The question of ecology in the management of hotel projects comes to the heart of the debate and allows us to expose the efforts that are still to be made despite some progress. According to Flore-Anne de Clermont, project manager at Valdélia, 90,000 tons of furniture are thrown away in dumpsters every year. This figure is still too high, but it could be reduced if we communicate differently on the subject of reuse. “The more we anticipate the needs of our customers, the longer we will be able to make our products last and thus avoid wasting furniture. Manufacturers have an expertise to contribute because they have a real fine knowledge of materials and furniture. Philippe Nalivet also takes this aspect of up-cycling to heart as an industrialist, but it requires awareness-raising work with customers and upstream, from the design stage of the furniture.
At the same time, David Dalidec presents another strong figure: 60% of customers are willing to pay more to access more responsible hotels. And this responsibility includes measuring the carbon footprint of its work, collaborating with local actors, and using as many recycled and sustainable materials as possible. The objective is to raise the awareness of the project owner and propose concrete actions.

Thinking about the hotel in a hypercontext?

For everyone, the hotel is now thought of as a place that is transversal in its activities, hybrid in its encounters, and porous to the ecosystem that surrounds it. Necessarily multi-program, it faces a complex activity, in a temporality that must be managed with spaces that adapt. It is a place of life. For Frédéric Alzeari, RF Studio nourishes his vision of the hotel industry through the diversity of his experience:“Working on projects other than those of the hotel industry, allows us to have a holistic vision of the different fields of application of interior architecture. He concludes by returning to the importance of knowing the context (economic, industrial, geographical), because the standardization is posed from that point of view: “It’s by asking these context-related questions that we come up with new answers.”
Maïa Pois
ConferenceEquipHotel 2022