What new concepts are emerging in the contracting landscape?

LifeHotels is a new hotel concept imagined by Anthony Bezin, and created in March 2020 “when we all had time to think”. A concept deployed in two hotels in Marseille and Bordeaux: “LifeHotels offers a budget hotel offering that tries to revolutionize the balance between location, room size, product lifecycle and price offered to the customer.” To the basic service have been added a fitness room and a coworking space, since the most important point of the concept is to allow a hybrid use of spaces: “We are not going to claim to be a lifestyle, we are going to be a little more neutral in the spirit that we give off before letting the client use the space as he wishes. adds Anthony Bezin. At the same time, the LifeHotels teams have integrated a CSR commitment into their approach (better waste sorting, choice in materials used). 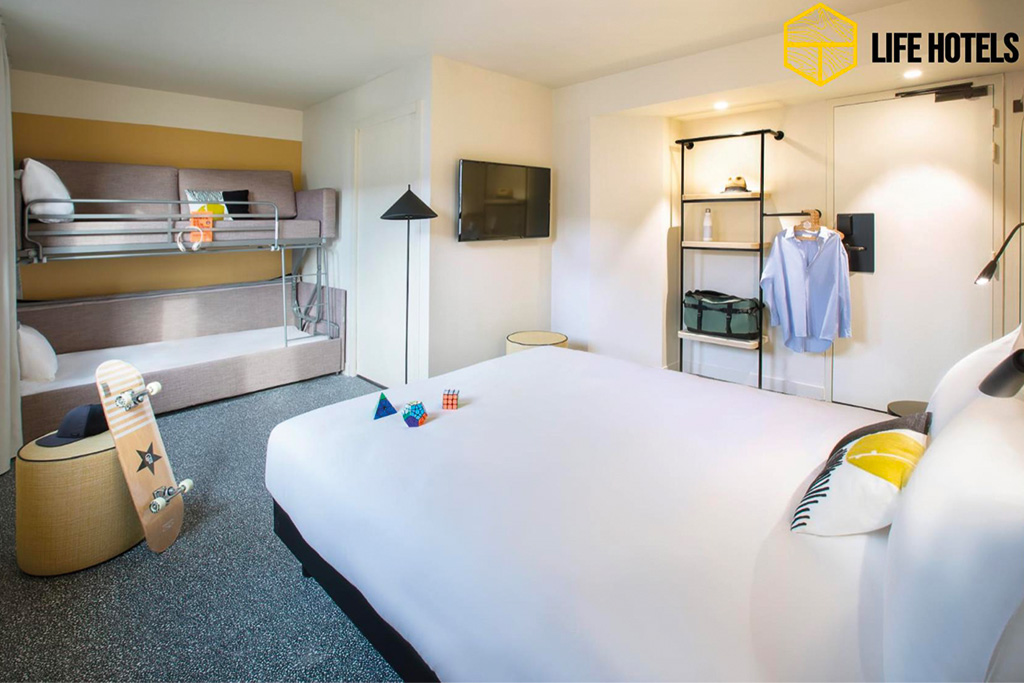 To what extent is hybridization not the future of the hotel industry?

Interior designer Donatien Carratier insists on the need to reinvent the concepts and possibilities of customer experiences: “Shouldn’t the hotel question itself on what it really is, namely an agora, a place of connection between the street, the neighborhood and the city? And there, the notion of hybridization would take on its full meaning.” A hybridization that can be done on several levels, according to Boris Gentine: “We have more and more brands that are playing the hybridization game, such as Yves Rocher with the La Grée des Landes hotel-spa in Brittany, Maison du Monde Hotel & Suites in Nantes and Muji Hotel.” A way for these brands to express their “art of living” DNA: “Places should encourage exchange and encounters. And whether you’re a hotel, an office or a store, that logic is the same for everyone.” 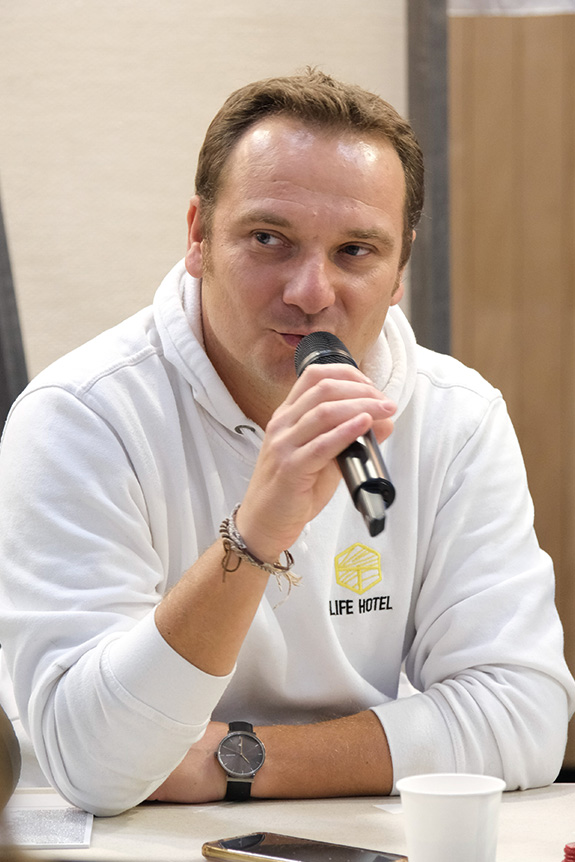 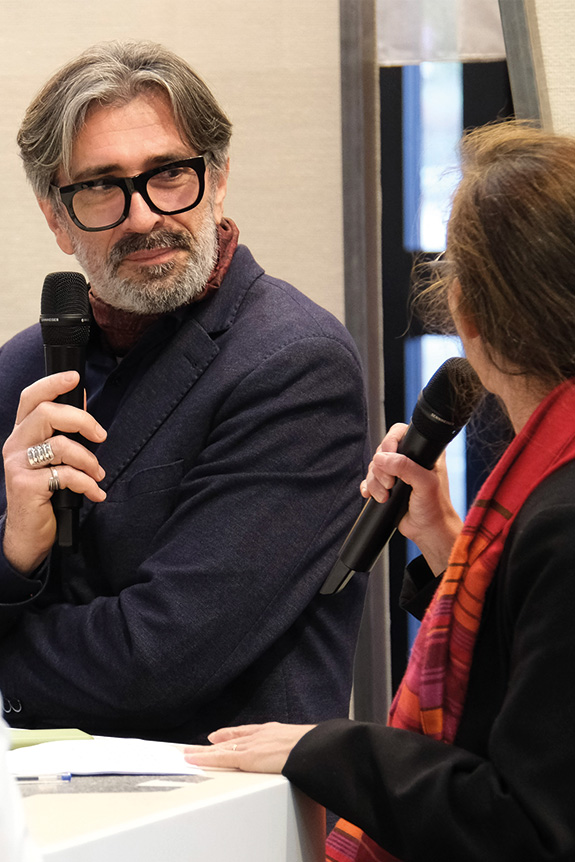 Night hotel vs day hotel, two experiences in one

For Donatien Carratier, it is by playing on the management of day/night temporality, that the hotel can reinvent itself, and that hybridization can take shape: “The agora hotel creates a place of convergence on its surroundings, with an interest for the customer and for the operator.” A convergence that is achieved by taking into account the environment of the establishment, reminds Alix Thomsen: “The life around it enriches the experiences and makes the hotel not just a place where you come to sleep, but a place where you come to live.”

The hotel: the future of retail?

Presenting the hotel project he realized for Baccarat, Chafik Gasmi comes back on the possible bridges between retail and hotel: “I think the future of the hotel is retail. The hotel business based on the fundamentals is the old days. “In particular, he talks about an inspiring space for the customer that allows him or her to easily purchase products presented in the establishments, as simply as one orders on the Internet today.

Get the teams talking

To bring the concepts to life, the entire team that will be involved in the facility must be integrated as much as possible. In one of his current projects, Chafik Gasmi has called upon all the hotel’s stakeholders. Thus, they defined together the stakes of the project: “The teams are also part of the success of an establishment.” A way to involve the teams in the projects, whether it is the drawing that remains a first “realistic” approach or a 3D projection. “It is necessary to be fair, honest and not to make an image to sell, but which is the support of a project and a reality” specifies Donatien Carratier.

How do you define customer experience?

“It begins above all with a human experience” according to Boris Gentine, and is based on the combination of a sensory experience linked to a share of the unexpected. So, how do you improvise moments of encounters, of surprises? And how to transform the hotel into a form of theater? He explains, “We can invent these uses and moments of life as interior designers, but we especially need clients and this appetite to bring this life and sensoriality back into the spaces.” 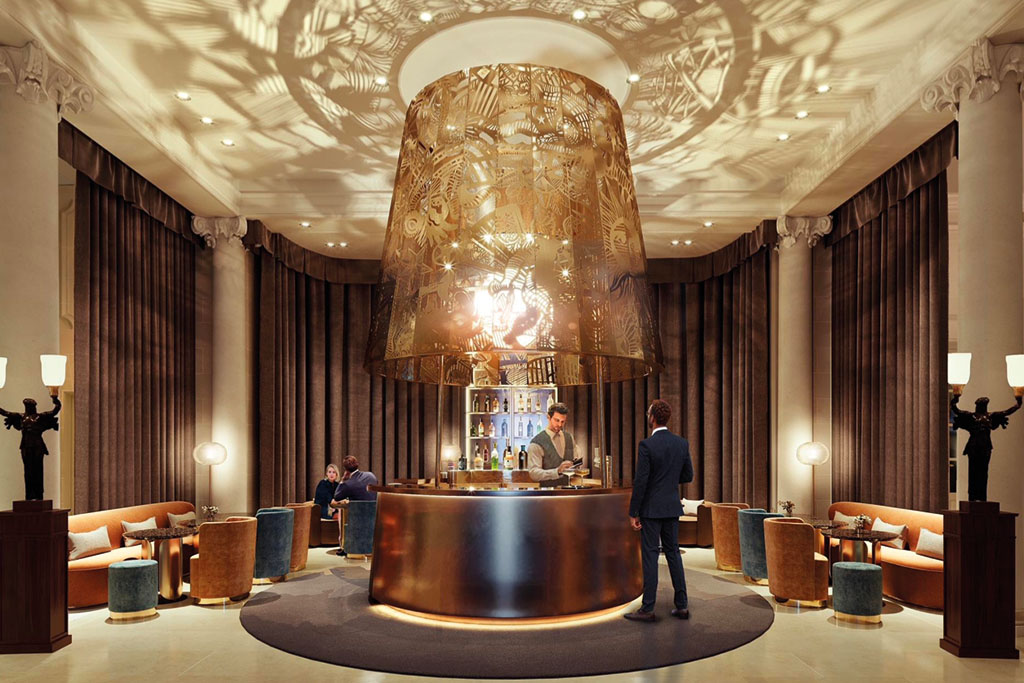 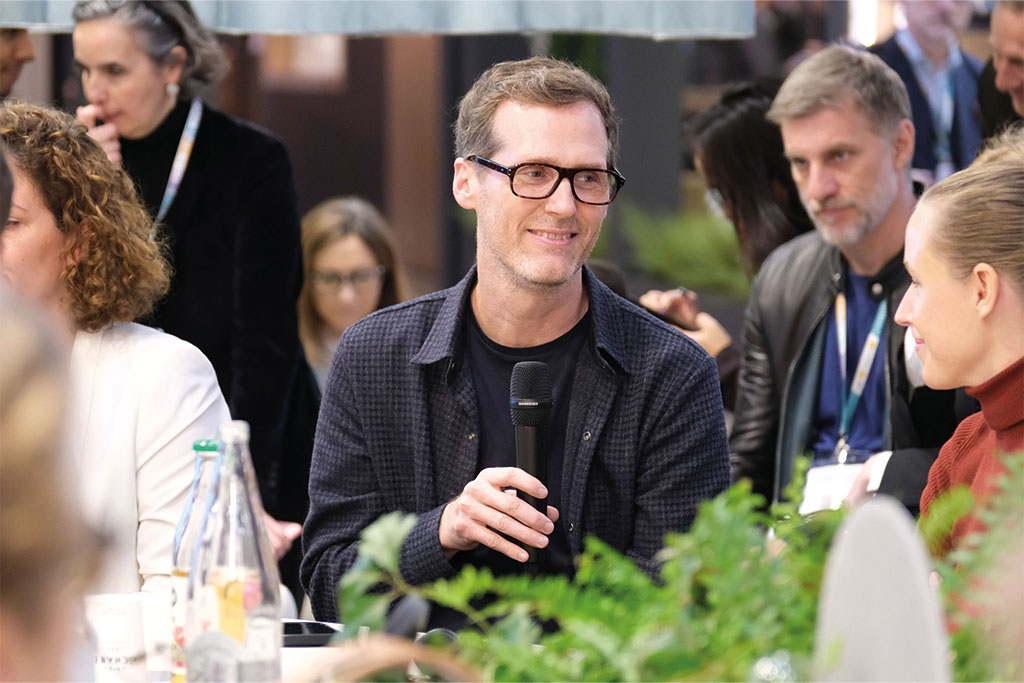 Alix Thomsen, who designed the Paradisio Hotel project, says that the customer experience must be scripted from the brief, and must therefore include the furniture. In this concept, the cinema invites itself into the room. The hotel is composed of “standard” rooms that take up the codes of the cinema room, but also of other room-sharing spaces. And for this type of experience, designing custom furniture is essential: good support from manufacturers is essential. What Boris Gentine says: “It’ s important to be accompanied, but also to be listened to. So it’s good to have a designer who is creative, has ideas and is open to proposals and discussion.” 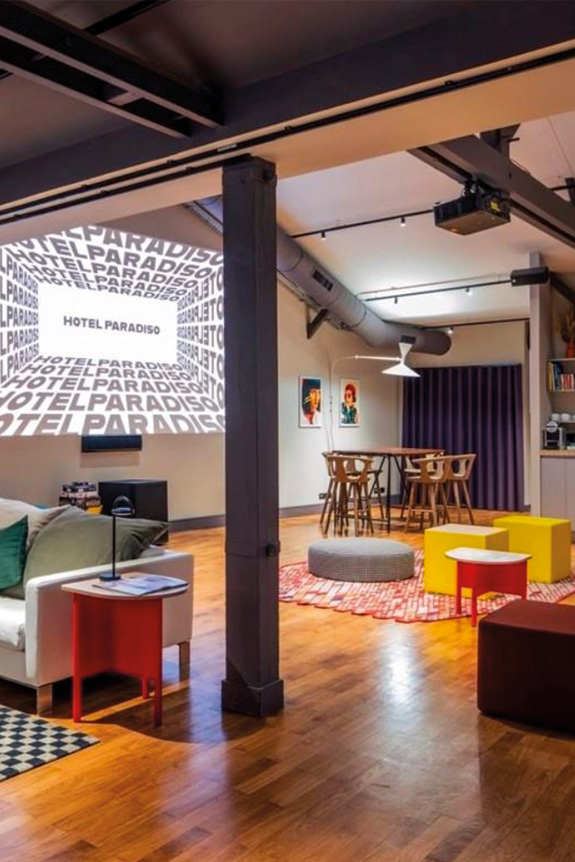 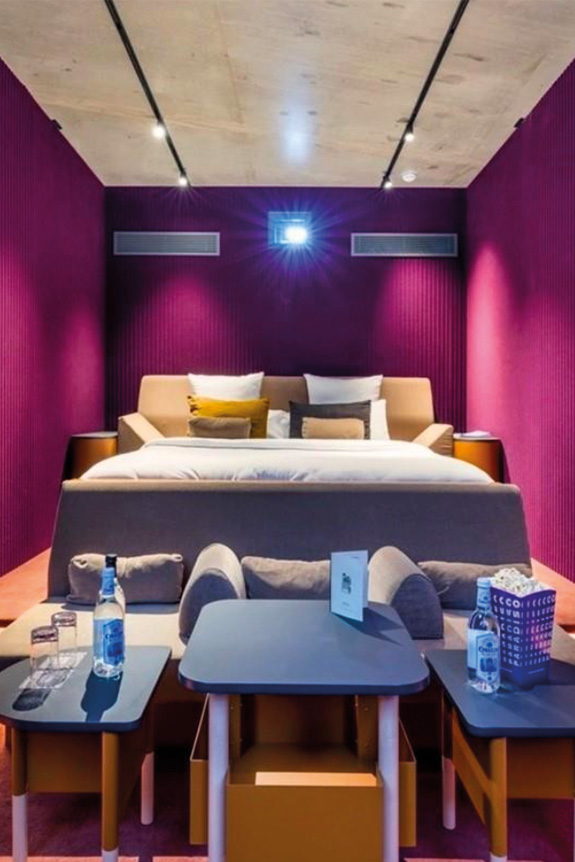 MK2 Paradisio hotel © Alix Thomsen
This dialogue with the manufacturer is essential for Emilie André, creative director of the Jean-Marc Gady studio: “We have as much to contribute to our manufacturers as they have to teach us. It is this exchange that nourishes creativity and allows us to go beyond our respective knowledge, since we do not have absolute knowledge. Our role is to be the catalyst between all this know-how in order to create a language that everyone can understand. The dialogue with manufacturers upstream of projects is all the more important because it allows to “create a relationship of trust” at the design stage, to quote Alix Thomsen. 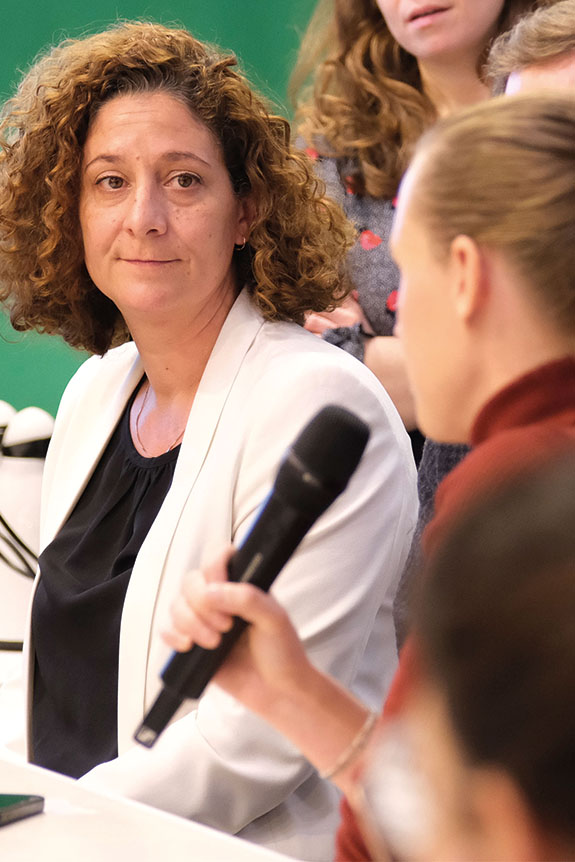 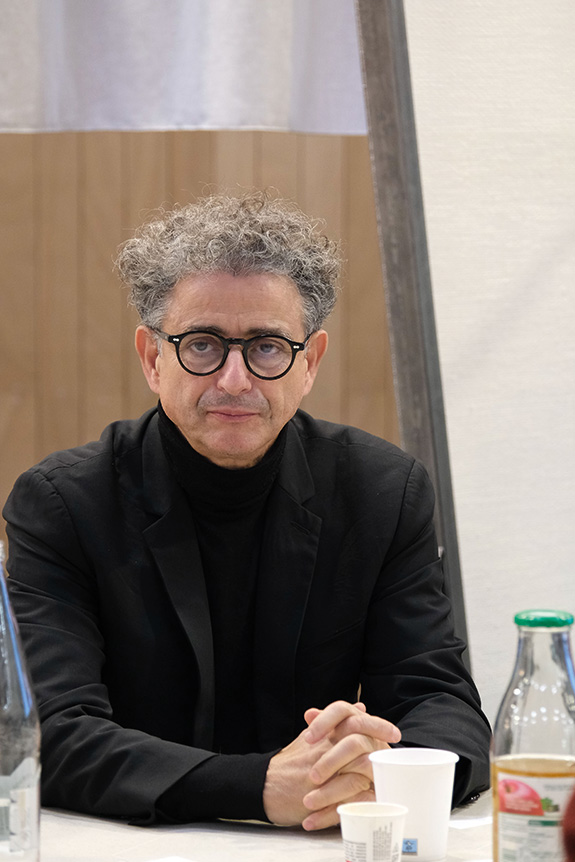 Cathy Dufour, General Delegate of Ameublement Français, presents some initiatives implemented in collaboration with manufacturers: “We have manufacturers who do a lot of things, but they don’t know how to measure it. “ In particular, it mentions an estimate of decarbonization by 2030 and 2050 for the furniture industry: “A piece of furniture made in France is on average 42% less polluting than imported furniture. “She also points out that France is a reference country in terms of “clean production”, and that French manufacturing is therefore to be favored as much as possible for conclusive results at the ecological, ethical but also economic level. 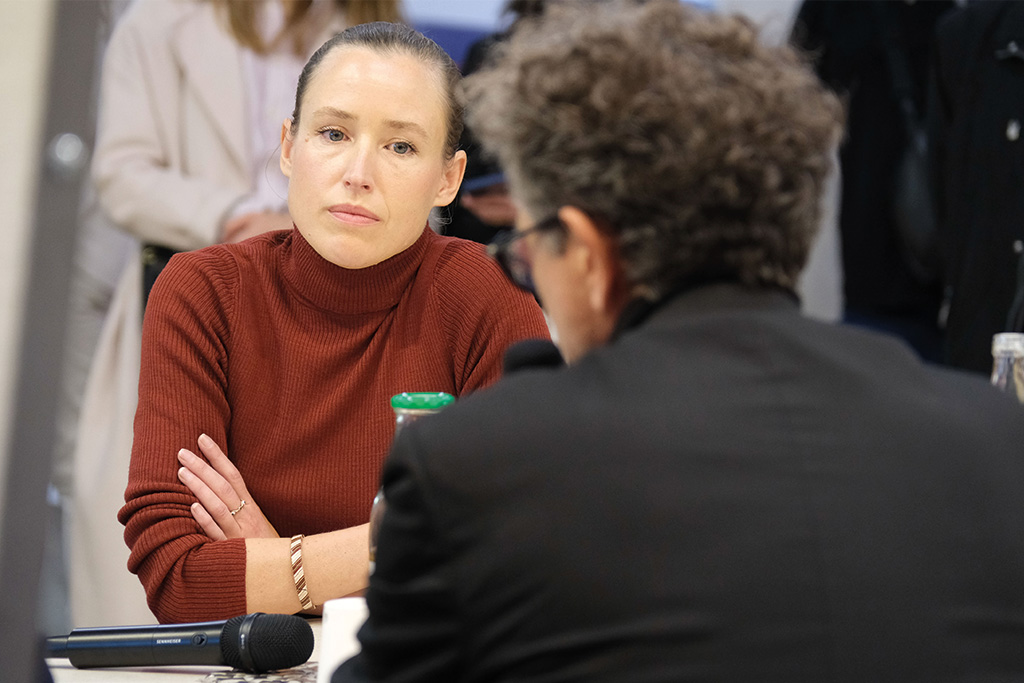 Taking risks at all levels

For these new hotel codes to be explored, it is also up to project owners to be proactive, as Boris Gentine is convinced: “We’re going to have to take risks at all levels. We need everyone to step up to the plate to support these changes. The future belongs to the bold, but we already knew that, so let’s go.”
Maïa Pois
EquipHotel 2022